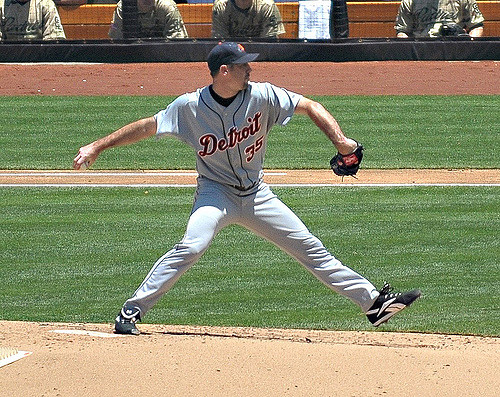 The surging Kansas City Royals hit the road for the first of three games with the Detroit Tigers on Monday night at Comerica Park. Brandon Moss recorded an RBI double in the bottom of the ninth inning to lift the Royals to a 6-5 win over the Chicago White Sox on Sunday, their fourth walk-off victory during a 6-4 homestand. Kansas City has won five in a row overall, one shy of matching its longest winning streak of the season, and remains just 1.5 games behind first-place Cleveland in the American League Central. Second baseman Whit Merrifield is on a terrific run, delivering a pair of solo homers Sunday to finish the homestand with a .375 average and eight RBIs. Moss is 8-for-19 with two homers and eight RBIs during a five-game hitting streak for a Royals team that leads the AL with 30 comeback wins. The Tigers split four games at Kansas City last week and followed that up by taking two of three at Minnesota – capped by Sunday’s 9-6 win. Jose Iglesias homered and drove in three runs in the victory to keep Detroit within 6.5 games of first and five back in the Wild Card. Detroit slugger Miguel Cabrera returned from a collarbone issue but went 0-for-5 with three strikeouts to drop his average to .256, the lowest it has been in nearly two months. Tigers CF Alex Presley is on fire, recording back-to-back three-hit games while batting .459 during his 10-game hitting streak.

Jason Hammel will make his team-leading 20th start of the season and has gone five straight outings without a win. He turned in a solid effort last time out opposite Justin Verlander on Wednesday, allowing one run in 6.1 innings. Hammel has allowed three runs or fewer in eight of his last nine starts since giving up four runs in 4.1 innings against the Tigers on May 29th. He is 2-2 with a 6.98 ERA in 11 career games (eight starts) versus Detroit.

Verlander allowed two runs and struck out eight in seven innings against Hammel his last time out, leaving him with a 2.57 ERA in three meetings with the Royals in 2017. That’s a far cry from the rest of the league as Verlander has a 4.97 against all other opponents. He has the highest walk rate of his career (4.2 per nine innings) but has issued exactly one walk in three of his last six starts. Verlander has had good success against most Royals regulars, with the notable exception of catcher Salvador Perez, who is 25-for-61 with two homers and eight doubles against him.

I don’t care what the pitching matchup looks like. The Royals are a team to bet on right now especially when they’re a nice + underdog. They are starting to play like they did when they went to back-to-back World Series and I wouldn’t be surprised if they pass Cleveland this week atop the AL Central.