MMA Is It Time to Lay Down the Gloves? 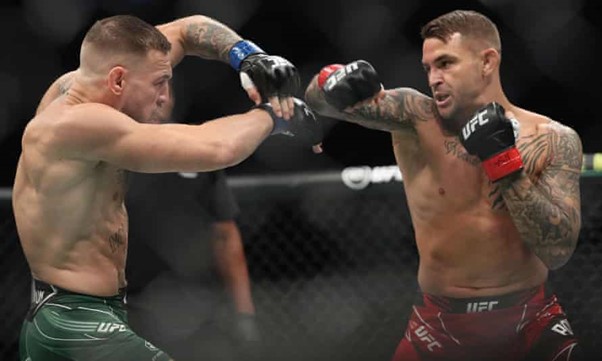 We’re off the back of an exciting UFC 264 event as the UFC returned once again to the T-Mobile arena in Las Vegas as the filled stadiums seem normal once again for MMA and those who weren’t able to attend turn to online gambling for wagering on once again one of the biggest fights in the history of the UFC. Many fans were extremely excited for the trilogy fight between Poirier and McGregor, and although the fight came to an end earlier than many had hoped, for some it was still the expected outcome, although some early excitement did show signs of something a little different, signs of a fighter long since in the past. It does now raise the question, however, is it time for McGregor to lay the gloves down?

The same questions have been around since the Mayweather fight, after all it is hard to want to get into a cage with some of these top tier fighters when you have all that money in the bank and the hunger is no longer there, particularly with the sale of his Whiskey brand too questions around the motives for getting in the cage have been there ever since, and having only won a single fight in five years with that fight being against an older Cowboy Cerrone, the questions with this record will now always be there.

His out of ring antics have been brought up often too, whether it be the dolly and bus incident back with the Khabib saga or the pressers with Diaz, there’s never a dull moment but sometimes verging on a little too far, and once again this weekend after the loss against Poirier, some less than tasteful comments from the corner of the ring whilst Dustin was being interviewed has many calling for UFC Boss Dana White to stop enabling the behaviour. It’s tough, McGregor is undoubtably still such a huge crowd draw, but with his current record, seemingly lack of willingness to be active in the way he needs to, and these ‘out of ring antics’, integrity for the UFC and the bar of high calibre fighters it has set over the years needs to be considered too – can you really keep a guy that isn’t winning, isn’t really fighting, and is instead just spouting inflammatory comments at some of your more popular guys? A tough question for sure.

With the early end it seems there’s no doubt that it’ll lead to a fourth fight and with the previously mentioned comments from McGregor after the fight they’ll no doubt have their promotional material as a grudge match for two fighters that hate each other – it seems a stark difference from fight number two which both fighters had shown nothing but respect and good will, none of the trash talk to sell the fight, and a McGregor that seemed a much more matured version of himself – although retirement probably isn’t on the cards, maybe it should be.