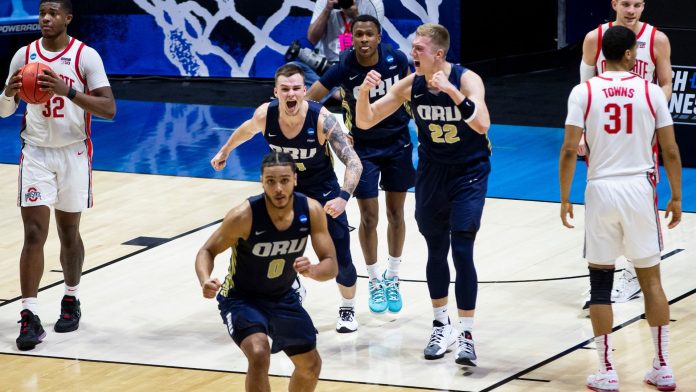 The best time to get hot in College Basketball is the month of March. The Oral Roberts Golden Eagles are doing just that and have shocked the world with their win over No. 2 seed Ohio State on Friday. The 15th-seeded Golden Eagles look to continue their magical run when they face the seventh-seeded Florida Gators on Sunday evening for the right to punch their ticket to the Sweet 16 next weekend. Oral Roberts finished fourth in the Summit League regular season, but ran right through their conference tournament to earn a spot in the Big Dance. They gave Ohio State they could handle on Friday and then some in the 75-72 overtime victory over the Buckeyes to become just the ninth 15 seed to knock off a No. 2. The Gators also had to go an extra five minutes on Friday to fend off No. 10 seed Virginia Tech 75-70. Florida won despite going into the game shorthanded and seeing the team’s third-leading scorer, Tyree Appleby, leave in the second half after he took an elbow to the face. He left the game to receive stitches and did not return. Coach Mike White was unsure of his status for Sunday. White made the decision before the game not to play Omar Payne after the reserve forward was ejected from the SEC tournament quarterfinals for a flagrant-2 foul on Tennessee’s John Fulkerson, who sustained a concussion and facial fracture. While the SEC did not suspend Payne, White did. The Gators trailed by 10 in the first half and 44-36 with 15 minutes left in regulation. The winner will play either Texas Tech or Arkansas next weekend in the Sweet 16.

Guard Max Abmas made sure people know who he is by making his presence felt early and scorched the Buckeyes with 29 points, five rebounds, and three assists while playing all 45 minutes. Forward Kevin Obanor also had a monster game with 30 points and 11 boards. If the game comes down to free-throws, the Golden Eagles have the edge. They are hitting 82.4 percent for the season and also rank tops in the nation with 10.9 threes made per contest. Oral Roberts went 11-of-35 against Ohio State on Friday. Another factor in beating the Buckeyes was that the Golden Eagles only committed six turnovers in winning their first NCAA Tournament game since 1974.

Florida got a huge effort from junior center Colin Castleton, who produced 19 points (15 after halftime), 14 rebounds, and three blocks in 43 minutes. Tre Mann had 14 points and three 3-pointers, including a late one in the clutch in the win over Virginia Tech. The Gators should come into the second round with better respect for Oral Roberts than what Ohio State showed. If Florida gets behind early like they did against the Hokies, the Golden Eagles might make them pay. The Gators are fourth in the nation with 5.4 blocks per game and seventh with a 9.3 defensive block percentage. Each of Florida’s last two games have gone over the total after a string of eight straight unders.

Florida didn’t play their best against Virginia Tech and will need a better effort to put away the upstart Golden Eagles. Oral Roberts has two big-time players who can keep the game close. They are better than a 15-seed. Look for a tight game.