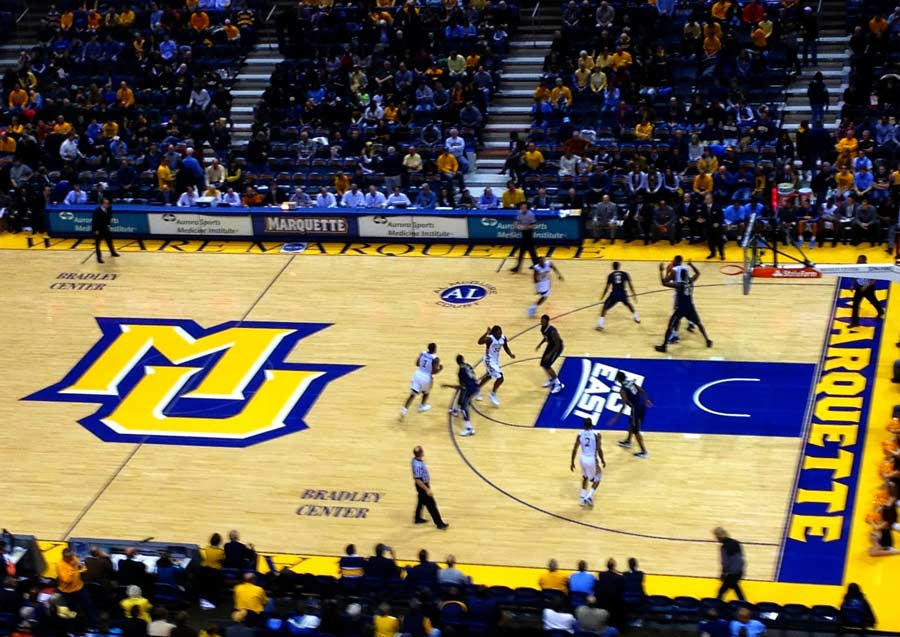 The Penn State Nittany Lions and Marquette Golden Eagles have been playing basketball for a long time, but the two teams have not met since 1995. The Golden Eagles will host the Nittany Lions in the quarterfinals of the National Invitation Tournament (NIT) on Tuesday night. The winner will move on to the semifinals at Madison Square Garden next week, where oddly enough, was the last time Penn State and Marquette played with the Eagles winning 87-79 in the semifinals. The fourth-seeded Nittany Lions knocked off Temple at home to begin the tournament before an impressive win at top-seeded Notre Dame 73-63 on Saturday – on St. Patrick’s Day nonetheless. Tony Carr scored 24 points as Penn State moved to within one win of its sixth all-time berth in the NIT semifinals. The Golden Eagles earned a hard-fought 67-60 home win over Harvard to open the tourney, then knocked-off Oregon 101-92 on Sunday. Marquette is a deadly three-point shooting team, ranking third nationally at 41.7% and are also third at the charity stripe (80.4%). The Golden Eagles nailed 12-of-26 from beyond the arc in the victory over Oregon in the second round. Both teams played their respective conference tournaments in Madison Square Garden and would love to get back there again next week. The winner will get either Louisville or Mississippi State.

Carr had a terrible opening round game against Temple, hitting just 1-of-12 shots, but rebounded with his 15th 20-point game this season in the second round against Notre Dame. Josh Reaves contributed 18 points, nine rebounds, three assists and three steals with zero turnovers in 40 minutes. Forward Mike Watkins has missed six straight games with a knee injury and is probably out for the remainder of the tournament, giving way for freshman John Harrar, who had six boards and two blocked shots in 23 minutes against Notre Dame.

The Golden Eagles scored 58 points before halftime against the Ducks en route to their best offensive showing of the season, and Andrew Rowsey led the way with 29 points and nine assists. Rowsey and Markus Howard average more than 20 points per game and Sam Hauser is the one other double-digit scorer at 14.1, but is averaging 4.3 points on 4-of-17 shooting over his last three games. Howard drilled four three-pointers on Sunday as part of his 18-point performance.

This should be a pretty competitive game, but I’ve been more impressed with Penn State this season. They have earned road victories over Ohio State and Notre Dame now this season and are 7-1 ATS in their last eight away from State College. Look for the Penn State defense to guard the perimeter well and defeat the Golden Eagles.