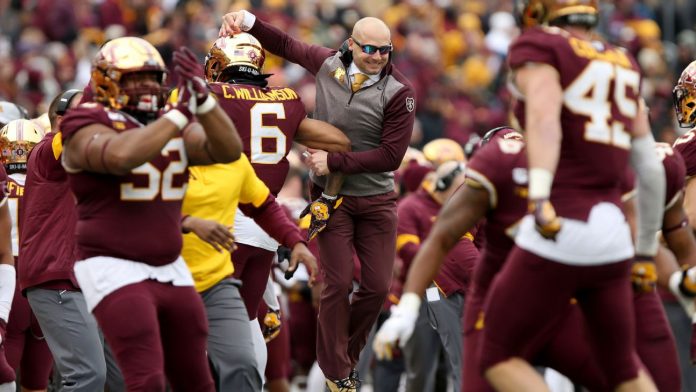 The Big Ten season is already underway with the Fighting Illini taking care of Nebraska at home during Week 0 – a game we correctly predicted over on our Free College Football Picks page. Now it’s on to Week 1 and that starts on Thursday night with the Ohio State Buckeyes visiting the Minnesota Golden Gophers from Minneapolis. Ohio State was 7-1 in the shortened 2020 season and lost in the College Football Playoff title game to Alabama, 52-24. The Buckeyes have won four straight Big Ten titles and have appeared in back-to-back CFP. The team lost a lot of players to the NFL, but always seem to reload with four and five-star recruits. This year is no different. Redshirt freshman C.J. Stroud has been named the successor to Justin Fields at quarterback. Fields was a first-round pick by the Chicago Bears in April’s Draft. Stroud won the competition over fellow 2020 four-star recruit Jack Miller, 2021 five-star prospect Kyle McCord, and Quinn Ewers.

The Gophers finished a disappointing 3-4 in 2020 after an 11-2 mark in 2019. They are led by fourth-year quarterback Tanner Morgan. His favorite target will be Chris Autman-Bell, who made 22 catches last season and is Minnesota’s top returning wideout. However, Autman-Bell is questionable for Thursday with a leg injury. Minnesota will be almost two touchdown underdogs in this one with a total set at 64.5. The Buckeyes have beaten Minnesota 11-straight times, but are just 2-5 ATS in the last seven meetings. They last played in 2018 – a 30-14 home win for Ohio State as 30.5-point favorites.

None of the quarterbacks on the Ohio State roster has thrown a pass in a college game. The good thing is, the Buckeyes have a very good receiving corps led by Garrett Wilson and Chris Olave, who led the team with 729 receiving yards to go with seven touchdowns on 50 receptions. Wilson, a junior, caught 43 balls for 723 yards and six scores. Running back Trey Sermon is gone, so the heavy lifting falls to Master Teague III, who ran for 514 yards and eight scores a season ago. Last season, the Buckeyes were seventh in the nation with 256.9 rushing yards per game. Ohio State will host the Oregon Ducks next Saturday in their home opener.

Unlike Ohio State, the Gophers will have an experienced quarterback in senior Morgan. In 2020, Morgan took a step back from an impressive 2019 and Minnesota dropped to eighth in the Big Ten in pass at 199.1 passing yards per game. Morgan threw five interceptions and only seven touchdowns, while also taking 13 sacks. The Gophers have arguably the best rusher in the entire Big Ten conference in redshirt senior Mohammed Ibrahim. The 2020 Big Ten Running Back of the Year led the league in both in rushing yards (1,076) and touchdowns (15). Minnesota has 10 returning starters back on each side of the ball and are out to prove that 2019 was not a fluke.

I believe Minnesota can keep up with the Buckeyes in this one. Ohio State is using a freshman QB, who might have some early-season jitters. The Gophers are a very experienced team and Morgan should have a big bounce back season. The Ohio State secondary was actually one of the worst in the country a year ago. I’ll take the points.