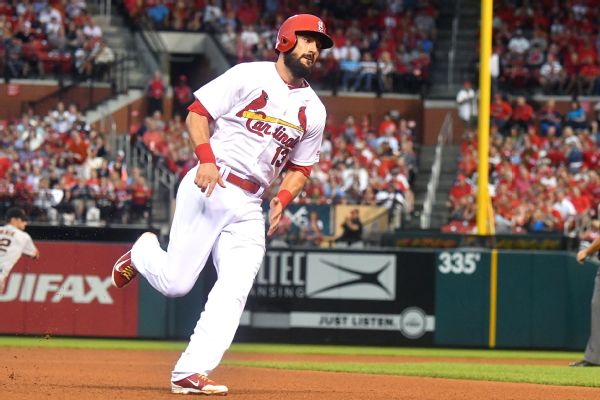 The Arizona Diamondbacks lost their spot as the top team in the National League on Saturday when the St. Louis Cardinals snapped their four-game winning streak. Arizona, who sits atop the N.L. West at 6-2, will look to start another streak when they play the rubber-match of their weekend series with the Cardinals at Busch Stadium. Jose Martinez was the hero in St. Louis’ 5-3 victory on Saturday, hitting his second home run of the season and driving in four runs. Cardinals OF Marcell Ozuna went 3-for-4 on Saturday and is 11-for-26 during his six-game hitting streak, while third baseman Matt Carpenter has reached base safely in all eight games. The Cardinals’ bullpen came through with four strong innings on Saturday despite being used quite a bit so far this young season. St. Louis’ rotation has recorded just one quality start, putting extra work on the relievers, but newly signed closer Greg Holland is expected to join the club Monday when the Cardinals open a series with the Milwaukee Brewers. Arizona is having a nice start to the season despite a slow start from star Paul Goldschmidt, who is hitting just .115 with no home runs and two RBI. Outfielder Chris Owings has picked up some of that slack by hitting .400 with a homer and six RBI.

Taijuan Walker is coming off a season in which he seemed to never get the run support he needed to put up big numbers. Walker lost six games in 2017 in which he allowed three or fewer earned runs. This will be his second start of 2018 and wasn’t sharp against the Dodgers last week, allowing three runs and eight hits over five innings with two walks and four strikeouts. Walker is 0-1 with a 4.50 ERA in two career starts against the Cardinals.

Luke Weaver will get the ball for St. Louis and picked up where he left off in 2017. He posted a 7-2 record in 13 appearances last season and held the New York Mets to one run and five hits over five innings in a 5-1 win last week. He recorded two strikeouts, but generated just two swinging strikes but didn’t allow much hard contact in throwing 92 pitches. He did strikeout 72 batters in 60.1 innings last season, so his season debut was a bit of a fluke.

If Weaver can’t get the D’Backs to swing and miss, he might be in for a short day. This Arizona team can hit and its only a matter of time before Goldschmidt breaks out in a big way. Walker struck out 10 Cardinals the last time he was in Busch Stadium, and I can see him repeating that type of effort on Sunday.