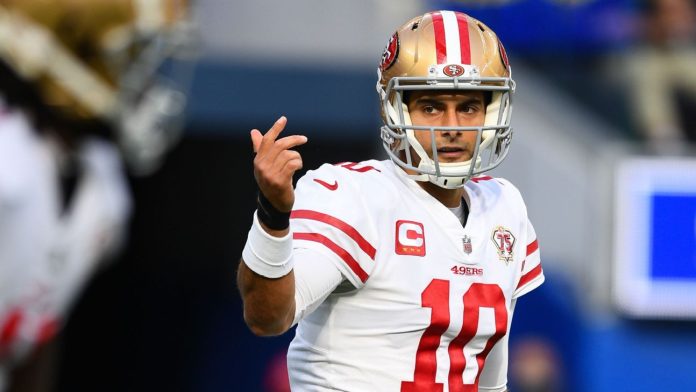 You hate to see anyone get hurt, but the San Francisco 49ers’ fortunes might have turned last Sunday afternoon when starting quarterback Trey Lance was carted off the field. Former starter Jimmy Garoppolo now re-takes over the reigns and will get his first start of the season on Sunday Night Football when the 49ers visit the Denver Broncos. Garoppolo has already led the team to a Super Bowl and nearly got San Fran to another one last season before having surgery on his throwing shoulder and then getting shopped around to other teams. The 49ers are now one of the NFC favorites with Garoppolo at the helm and will enter this game with a 1-1 record after a 27-7 home win over the Seattle Seahawks last Sunday.

Garoppolo’s will go up against a Denver defense that has allowed a total of 26 points in their first two games – albeit against Houston and Seattle. This was supposed to the year the Broncos finally broke through and made a postseason run. It could still happen, but the offense has looked bad the first two weeks under future Hall of Famer Russell Wilson. Denver held off the Texans 16-9 last week as 10.5-point favorites after losing 17-16 to the Seahawks in Week 1. Wilson doesn’t have much to throw to with Tim Patrick gone for the season with a torn ACL, and Jerry Jeudy is dealing with a rib injury that has him listed as day-to-day. The good news is Wilson knows the Niners well and is 16-4 in his career against them, completing 64.7 percent of his passes for 36 touchdowns and 10 interceptions.

Just like last year, the 49ers have been hit with key injuries in each of their first two games. In the opener, running back Elijah Mitchell went down with a knee injury and was placed on injured reserve. Then of course, Lance went down last week and hopes to be ready for next season. The good news is that tight end George Kittle practiced this week and could make his season debut on Sunday night. Kittle has missed the first two games of the season with a groin injury. Garoppolo was 13-of-21 for 154 passing yards with a touchdown and also ran for a score in the win over the Seahawks. The 49ers are 4-0 against the spread in their last 4 games following an ATS win. San Francisco will host the Los Angeles Rams next Monday night.

Denver has already been penalized four times for delay of game and burned all of their second-half timeouts with 7:38 left last week against Houston under first-year coach Nathaniel Hackett. This will be Denver’s second prime time game of the young season and they have three more scheduled after this. Th Broncos two-headed rushing attack of Javonte Williams and Melvin Gordon III have been solid so far but Wilson has only ran the ball three times for five yards. Denver got some good news on linebacker Josey Jewell, who has missed the first two games with a calf injury. He practiced Wednesday, and the shoulder injury that cornerback Patrick Surtain II sustained against the Texans is not serious. Denver will play at Las Vegas next Sunday.

Based on who Denver played in the first two weeks, you could argue they look like the worst team in the league. Hackett has looked lost running the offense and Wilson looks old. The Niners have a great team and they love playing for Garoppolo. It’s a tough environment, but San Fran will be up to the task.