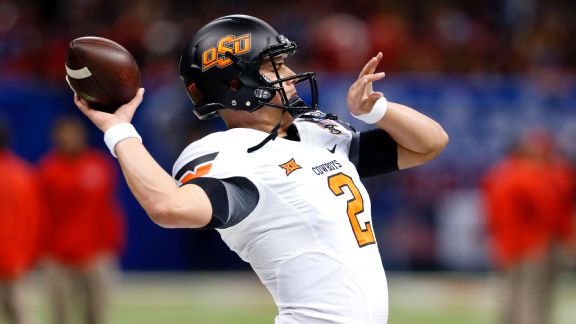 There are some high expectations this year in Stillwater for the Oklahoma State Cowboys and the party gets started on Thursday night when they host the Tulsa Golden Hurricane in the season opener for both teams. Head coach Mike Gundy enters his 13th season at OSU head coach and could have the most electric trio of offensive playmakers in the Big 12 Conference. Mason Rudolph is the Big 12’s leading returning passer and running back Justice Hill is the league’s second-leader rusher, while preseason All-American James Washington is considered by some draft experts as the top senior receiver in the country. The Cowboys were the only team in the country last season besides Clemson to have a 4,000-yard passer (Rudolph), a 1,000-yard rusher (Hill) and a 1,000-yard receiver (Washington). Rudolph enters the season ranked in the top six among active FBS players in five career categories: passing yards (8,714; third), passing yards per game (300.5; second), passing yards per attempt (9.1; second), pass efficiency (154.12; third) and touchdown-to-interception ratio (55:17; sixth). Washington’s 26 career receiving scores is the highest among all active FBS players heading into this season, while his 2,923 career receiving yards and 19.2 career yards per reception lead all active receivers from Power 5 conferences. So, the evidence is there – this offense will be explosive. Cornerback Adrian Baker comes over from Clemson and will add depth to a secondary led by preseason All-Big 12 free safety Tre Flowers, who has 200 career tackles and is one of only five starters returning on defense. The Cowboys were in the middle of the conference pack in total defense last season, allowing 29.1 points a game.

Don’t sleep on Tulsa, however. They are predicted to finish near the top of the AAC West with Houston and Memphis, but will need to replace their top passer, rusher, and top two receivers. School record-setting quarterback Dane Evans, AAC leading rusher James Flanders and two 1,000-yard receivers (Keevan Lucas and Josh Atkinson) are all gone, but will still have enough firepower to keep up with most teams under third-year head coach Philip Montgomery (10-3 in 2016). Senior running back D’Angelo Brewer finished third in the AAC in rushing with 1,425 yards, while Justin Hobbs and Keenan Johnson hope to become the third set of Tulsa receivers in as many years to top 1,000 yards. Sophomore Chad President and freshman Luke Skipper are locked in a tight competition to replace Evans, who threw for 11,680 yards and 84 touchdowns in his career with the Golden Hurricane. Brewer is coming off a season in which he ran for over 100 yards six times and will benefit from an experienced offensive line that returns four of five starters. Tulsa set a school record in 2016 with eight 300-yard rushing games. The Golden Hurricane lost its top two tacklers from a season ago in linebackers Trent Martin and Matt Linscott, but the secondary should be better and is their strongest unit. The defensive line loses both defensive tackles, but they return everyone else on the line including Jeremy Smith (team-high 13.5 tackles for loss).

Tulsa traditionally has a pretty good offense, but it might take a few weeks for them to start clicking after losing their top stars from last season. The Cowboys are loaded on offense and despite a mediocre defense, they should score enough in this to cover the spread easily. If this game gets out of hand, tune into the Ohio State/Indiana contest on ESPN.