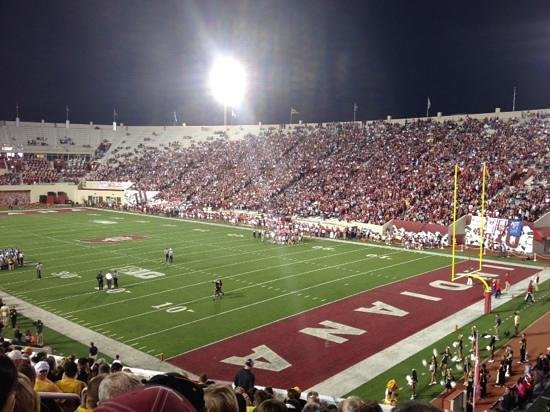 For the first time since 1975, the Ohio State Buckeyes will open a season against a Big Ten opponent as they get right into conference action against the Indiana Hoosiers on Thursday night in Bloomington, Indiana. The Buckeyes are coming off an 11-2 season in which they reached the College Football Playoffs but were humiliated 31-0 to eventual champion Clemson. J.T. Barrett returns at quarterback for Ohio State with Heisman Trophy aspirations after completing 61.5% of his passes last season and throwing for 24 touchdowns, while running for another nine. Barrett rushed for 100 yards three times while throwing just seven interceptions last year, but will not have the luxury of an experienced receiving corps after his top three wideouts moved on. TE Marcus Baugh, the team’s top returning pass catcher (24 for 269 yards in 2016), is probable because of a toe injury he’s dealing with. The Buckeyes will depend a lot on sophomore running back Mike Weber (1,096 yards, nine TDs), who is expected to play after being hampered by a hamstring injury in the preseason.The Buckeyes offense will be led by first-year offensive coordinator Kevin Wilson, who was fired as Indiana’s coach in December after going 26-47 over six years in Bloomington. Three high draft picks from the secondary must be replaced on a defense that is led by defensive lineman Tyquan Lewis (eight sacks last year).

Tom Allen will begin his first full season as head coach after replacing Wilson and will look to end Ohio State’s 22-game winning streak in the series on the way to leading the Hoosiers to their third straight Bowl appearance. Indiana has an experienced senior quarterback in Richard Lagow, who passed for 3,362 yards in 2016. The Hoosiers hope that Lagow can be more efficient this season after completing only 57.8% of his passes last season. He threw 19 touchdowns, but was also picked-off a staggering 17 times including four in his last two games. Indiana doesn’t have a running back returning that gained at least 250 yards, although they have a terrific receiving corps that is led by junior Nick Westbrook (54 catches, 995 yards, six TDs in 2016). The status of junior WR Simmie Cobbs, who missed most of last season with an injury after recording 1,035 yards on 60 catches in 2015, is questionable for the opener after he was arrested last month. The defense, which actually allowed less than 30 points a game last season, returns nine including All-American caliber senior linebacker Tegray Scales (33.5 career tackles for loss). Kicker Griffin Oakes has converted 53 career field goals and needs one to pass Mitch Ewald as the Hoosiers’ all-time leader.

The Buckeyes have been waiting to get back on the field for almost nine months after getting embarrassed in the playoffs. This is an interesting matchup in that Ohio State isn’t playing a cupcake or a high-caliber opponent like they will next week (Oklahoma). Indiana has covered the last six meetings and this will be their biggest home game of the year. They’ve had all summer to prepare for this matchup and I think they can keep it within three touchdowns. 73% of the public is on Ohio State in this one.