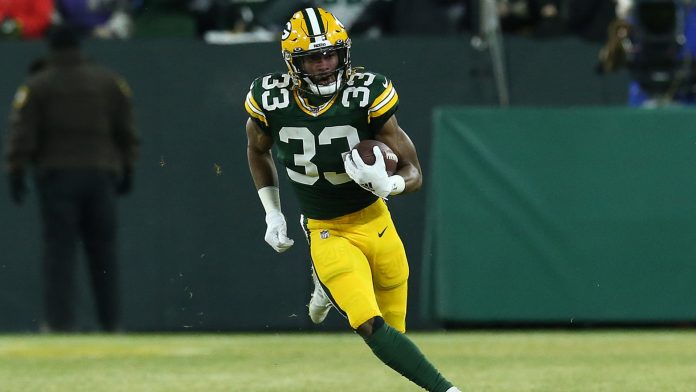 It’s been a very rough year for the San Francisco 49ers. Not only are they playing in the toughest division in football, but the injuries to key players will not stop. They will go into Week 9 shorthanded once again when they play on short rest at home versus the Green Bay Packers on Thursday night. Quarterback Jimmy Garoppolo (ankle) and star tight end George Kittle (foot) will be among the injured players sitting out and it’s very possible that neither will play again this season. The team also has issues at running back with Raheem Mostert and Jeff Wilson on injured reserve and Tevin Coleman (knee) out again after just returning last week. Garoppolo sustained a high right ankle sprain last Sunday in San Francisco’s 37-27 loss at the Seattle Seahawks. He missed two starts earlier this season due to an injury to the same ankle. Nick Mullens will start against the Packers. The Packers are dealing with health problems at running back as well. Star Aaron Jones (calf) is in danger of missing his third consecutive game, and backups AJ Dillon and Jamaal Williams are out due to COVID-19 protocols. Green Bay was shocked last week at home by the Minnesota Vikings as Dalvin Cook ran all over the Packers defense. The loss dropped Green Bay’s lead over the Chicago Bears to just a half-game in the NFC North. Green Bay won’t know until just before kickoff if it will have Jones, who has 550 scrimmage yards (389 rushing yards, 161 receiving) and seven touchdowns on the season.

The Packers are 2.5-point favorites in this Thursday night affair with a total of 51. This will be the third time the two teams play in less than a calendar year and all at Levi’s Stadium. In Week 12 last year, San Francisco dominated 37-8 behind two TD passes from Garoppolo. Green Bay’s Aaron Rodgers had just 104 yards on 33 attempts and was pulled late in the blowout. He was also sacked five times and lost a fumble. San Fran then took the NFC Championship Game over the Packers 37-20. Mostert had the greatest playoff game of any running back ever with 220 yards and four touchdowns. Rodgers threw for 326 yards and two scores but threw two picks and fumbled three times – losing one. Green Bay is 1-4 against the spread in its past five at San Francisco.

Rodgers has passed for 1,948 yards and 20 touchdowns against two interceptions this season, but doesn’t have a good recent track record in San Francisco, as we mentioned above. Davante Adams caught all three Rodgers TD passes in last week’s loss to the Vikings. Green Bay’s defense simply had no answer for Cook, who tore them apart for 163 rushing yards, 63 receiving yards, and four total touchdowns. If Jones can’t play this Thursday, the Packers running game would likely fall on Jamaal Williams, who rushed for 75 of the Packers’ 109 yards on the ground on 16 carries against Minnesota. The Packers, who are averaging 32.8 points, are 6-4 against the spread in their last 10 games overall. Green Bay will host Jacksonville next Sunday.

Mullens threw for 343 yards and one touchdown in a 36-9 rout of the New York Giants in Week 3, but couldn’t keep that momentum going the following week. He threw for 200 yards, one touchdown and two interceptions in a 25-20 loss to the Philadelphia Eagles. One of the interceptions was a pick-six in the fourth quarter that gave Philadelphia an 11-point lead. Mullens was then demoted to third string behind C.J. Beathard, but eventually moved back to No. 2 and passed for 238 yards and two touchdowns in less than a quarter on Sunday. The Niners dropped to 4-4 with the loss in Seattle last week after they appeared to be back on track with wins over the Los Angeles Rams and the New England Patriots. Coleman left the Seattle game with a knee injury and his status remains unclear for Week 9. San Fran still has JaMycal Hasty and Jerick McKinnon to carry the load.

I know the Packers were scorched on the ground last week, but they’re still 15th against the run and the 49ers are not fully healthy at running back. Seattle’s Russell Wilson destroyed the San Fran secondary last week and I’m sure Rodgers can do the same thing. I’ll lay the points. I expect the Packers to rebound in a big way.