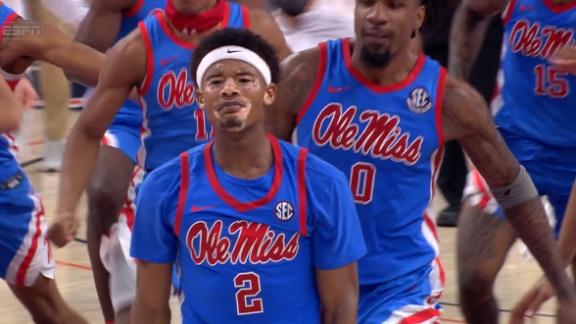 The Mississippi Rebels have already started their push towards a postseason berth and will get another chance for a resume-defining victory on Wednesday when they host the 10th-ranked Missouri Tigers in Oxford, Ms. The Rebels are currently not in the discussion for an NCAA Tournament berth according to Joe Lundardi’s projections. But, Ole Miss is coming off a win over then-ranked No. 11 Tennessee and a comeback victory over Auburn on Saturday. The Rebels are in the middle of a crowded pack in the SEC standings at 5-6, but are only 2.5 games behind Missouri, who is in second place. Mississippi’s offense picked it up in the 86-84 overtime win over the Tigers, but used solid defense in defeating Alabama 52-50 the game before. The Rebels are one of the worst 3-point shooting teams in the country at 27.9 percent for the season. Missouri is not only looking to lock up the No. 2 seed in the SEC, but improve on their high-seeding come March in the Big Dance. The Tigers jumped eight spots in the Associated Press Top 25 this week after upsetting Alabama 68-65 on Saturday in Columbia, Mo. Mizzou has won six of their last seven games overall and are an impressive 5-2 ATS in that stretch. However, the Tigers are just 2-8 SU in their last eight meetings with Ole Miss and the over is 9-1 in the last 10 encounters including a 75-67 Mississippi win in Oxford last March.

On Saturday, Ole Miss erased a 14-point, second-half deficit at Auburn to win in an overtime thriller. Rebels guard Devontae Shuler recorded 26 points and has averaged 19.1 points over the last eight games to raise his season average to a team-best 15.5. Forward Romello White, who is averaging just over 11 points a game, exploded for 30 to lead the Rebels on Saturday and drained 14-of-18 shots, while also pulling down 10 rebounds. Ole Miss is holding opponents to 63.4 points a game, but allow the opposition to shoot 37 percent from beyond the arc, which ranks them 315th in the nation. The Rebels will be at South Carolina on Saturday.

Mizzou guard Dru Smith has scored over his season average in three of the last four games and had 16 points and eight boards in the win over Alabama on Saturday. That came on the heels of a 26-point outburst against Kentucky a few days earlier. Jeremiah Tilmon has scored just 17 total points in his past two games after scoring a combined 54 in his previous two games. Tilmon leads the Tigers in both field goal percentage (63.1) and rebounding (7.9). Missouri holds opponents to just 40.9 percent from the field and 30.9 percent from 3-point territory. The Tigers will host Arkansas on Saturday.

Ole Miss doesn’t have the offense to keep up with Missouri in this one. Which is why the Rebels are 3-15 to the under this season. The Tigers have a lot of confidence right now and are 5-2 ATS in their last seven overall. I’ll back the much better squad here.