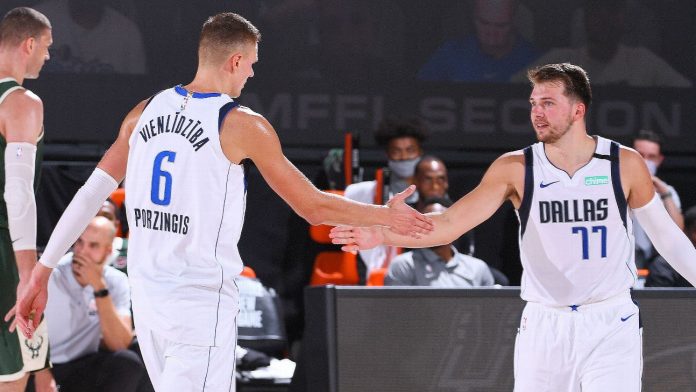 All season long, everyone has been looking forward to the battle of L.A. in the Western Conference Finals between the Lakers and Clippers. The teams finished the regular season as the top two seeds and were thought to cruise through their opponents. Well, someone forgot to give the Dallas Mavericks that memo. The seventh-seeded Mavs are dead even with the Clippers in their first round series at two games a piece with Game 5 set for Tuesday night in Orlando. L.A. will be the ‘home’ team for this one as it was for Games 1-2. The Mavericks’ stunning 135-133 overtime victory Sunday to tie things up hasn’t much changed the betting odds. Bovada Sportsbook still has the Clippers at -400 to win the series with the Mavericks returning +300. L.A. is also favored in Game 5 by 6.5 points with a total set at 236.

The main reason Dallas is in this series and can very well win it, is 21-year-old star Luka Doncic. He was actually questionable for Game 4 with a sprained ankle but put on a display for the ages including a remarkable game-winning three-pointer at the buzzer. Doncic ended the game with 43 points, 17 rebounds and 13 assists. He was the third player in NBA playoff history with a 40-point, 15-rebound, 10-assist game and the youngest ever to hit a playoff buzzer-beater league history. As for big man Kristaps Porzingis, who sat out Sunday, is having an MRI on Monday on his sore knee. Dallas went with a small starting five without him in Game 4, inserting guard Trey Burke. Tim Hardaway, Jr. contributed 21 points, while Burke scored 25 and the two combined for seven of Dallas’ 13 three-pointers.

Even without the Clippers having to deal with Porzingis on Sunday, they allowed Dallas to shoot 50 percent from the field while allowing 135 points. They also had a 21-point lead in the second quarter that they let squander away. Kawhi Leonard did play well with 32 points, nine rebounds and four assists, and Lou Williams had a career playoff-high 36 points. However, the Clippers are still missing starting point guard and defensive master Patrick Beverley, who hasn’t played since Game 1 due to a left calf injury. Paul George basically hasn’t shown up for the series yet, going 3-for-14 in Game 4 and is hitting 29 percent from the field in the series. The Clippers are 20-6 ATS in their past 26 after a loss.

Dallas can get enough offense from Doncic, Hardaway and Burke even if Porzingis doesn’t play. The Clippers aren’t as strong on defense without Beverely and this series could go the full seven games. I’ll take the points again.

Check out who Bobby Babowski has on his Free NBA Picks page for today. He is on a 10-2 Run!