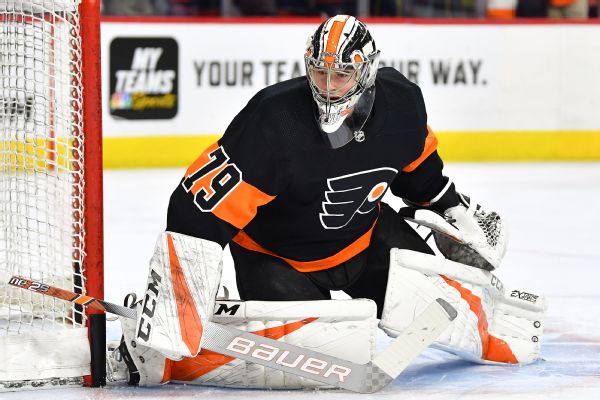 For the first time in eight years, the Philadelphia Flyers will be playing past the first round in the Stanley Cup Playoffs when they take on the New York Islanders Monday night in Toronto. The top-seeded Flyers got past the eighth-seeded Montreal Canadiens in six games to set up a series against the sixth-seeded Islanders for the first time since the 1987 Patrick Division Finals. New York beat up the third-seeded Washington Capitals in five games to set up the second round series. Philadelphia received a stellar effort across the board from its younger players, highlighted by second-year goaltender Carter Hart and defensemen Ivan Provorov and Phil Myers. The Flyers will also see the return of blueliner Matt Niskanen, who was suspended for Game 6 against the Canadiens for cross-checking Brendan Gallagher and breaking his jaw. Niskanen is the only member of the Flyers to have won a Stanley Cup. The Flyers had a difficult time scoring against Montreal, especially with their top lines, and will face another daunting challenge as the Islanders have given up the second-fewest shots of any team in the playoffs. The Islanders won all three meetings during the regular season, but the teams have played just once since the middle of November. Anthony Beauvillier scored two goals in the clinching game against the Capitals. He also recorded two goals in a Game 4 win over the Florida Panthers in the qualifying round. Only Mike Bossy and Bobby Nystrom had scored a pair of goals in a possible series-clinching victory in the same postseason before Beauvillier. New York prioritizes defense, which is why Washington managed just eight goals in the series. Bovada has over five goals in Game 1 set at -105, while Philadelphia is a slight -120 favorite to win the game.

Like Philadelphia, New York is playing great hockey, winning seven of their nine games in the NHL bubble including dispatching the Florida Panthers in the qualifying round. Head coach Barry Trotz won a Stanley Cup with the Washington Capitals a few years ago and wants to bring the hardware back to Long Island. Only two Islanders (Josh Bailey and Anthony Beauvillier) rank in the top 30 postseason scorers. Eleven players have scored for New York this postseason, nine of which scoring two or more. Goalie Semyon Varlamov has a .963 save percentage when the play is 5-on-5 and is one of the more underrated netminders in the league.

Defense and goaltending are carrying the Flyers thus far, as Hart’s .943 save percentage leads all NHL postseason goalies with three or more starts. Hart had back-to-back shutouts versus Montreal, but also had two shaky starts where he let in four goals before the third period and was pulled at one point for veteran Brian Elliott. The Flyers have enough depth to make a run at the Cup. Forwards Claude Giroux, Sean Couturier, and Travis Konecny are all still scoreless in the NHL bubble, combining for zero goals and 11 assists through nine games. However, Jakub Voracek leads all Flyers players with eight points in nine games, tied for 21st among postseason skaters.

If the Flyers get the main guys to start scoring, look out. But I have to base my Game 1 pick on how each team played in the previous round. The Islanders looked very good in dispatching the Capitals, but Washington kind of seemed like they didn’t want to be there. Still, this New York team is solid and will shutdown the Flyers in Game 1.

Jay Cooper - June 12, 2021
If the Milwaukee Bucks can mix in a little more offense to go along with stifling defense they displayed on Thursday, then this