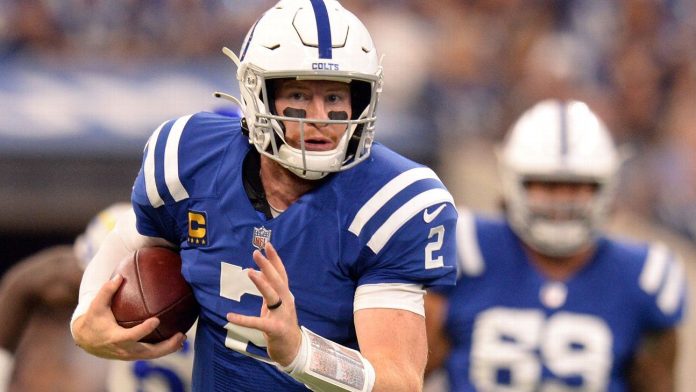 It took eight weeks, but we finally got our first big underdog outright winner in the NFL last week with the New York Jets shocking the Cincinnati Bengals at home. New York will look to make it two in a row when they visit the Indianapolis Colts as 10.5-point underdogs this Thursday night at Lucas Oil Stadium. Backup quarterback Mike White became an instant hero in the city of New York by passing for 405 yards and three touchdowns in New York’s 34-31 home win over the Bengals in his first career NFL start. The 26-year-old was starting in place of the injured Zach Wilson and there’s already talk of him sticking to that role even when Wilson is healthy. Wilson is a rookie out of BYU who is having a rough start to his career and the play of White could motivate him. After getting drilled 25-6 by New England in their home opener, the Jets have won each of the last two at MetLife Stadium as sizeable underdogs.

The Colts meanwhile, are licking their wounds after an intense division game with the Tennessee Titans. Quarterback Carson Wentz, who came into the game with just one interception on the season, threw two lousy picks that led to a 34-31 loss to Tennessee, who are now in total control of the AFC South. These two teams have seen plenty of each other in their history dating back to the Colts days in Baltimore. Indianapolis leads the all-time series 43-32 and rolled 36-7 in a Week 3 matchup last season. Neither quarterback in that game is still around. Sam Darnold was under center for New York and had two interceptions returned for scores, while the now-retired Philip Rivers was guiding the Colts. The total has gone over in seven of the past 10 meetings.

White completed 37-of-45 against the Bengals last Sunday and joined Cam Newton (422 yards in 2011) as the only quarterbacks since 1950 to pass for at least 400 yards in their first career start. He did that without top wide receiver Corey Davis, who is questionable for Thursday. White tossed the game-winning 13-yard scoring pass to tight end Tyler Kroft as the fans at MetLife started chanting his name. White split his college career at South Florida and Western Kentucky and passed for more than 4,000 yards in each of his last two seasons. Rookie running back Michael Carter had his best game as a pro with 77 yards and a touchdown and nine catches for 95 yards. Despite allowing 31 points, the Jets defense improved last week, allowing just 318 total yards to Cincy, almost 100 fewer than their average heading into Week 8. The over is 4-0 in the Jets’ last four games and they are 2-6 ATS in their past eight as underdogs.

The Colts now trail the Titans by three games in the division and have lost any tiebreaker they have with Tennessee. The focus now is on a wild card and with games the next two weeks against the Jets and Jacksonville Jaguars, there’s a chance to get some momentum back. Wentz completed 25-of-35 for 265 yards and three scores, but the two picks really hurt Indy’s chances at winning the game. Wentz has passed for 1,926 yards and 14 touchdowns on the season. Running back Jonathan Taylor ranks second in the NFL with 649 rushing yards, while Michael Pittman leads Indianapolis with 45 receptions and 594 yards and is tied for the team lead with four touchdowns receiving. He has already surpassed last season’s marks of 40 catches for 503 yards and one touchdown. Fellow wideout T.Y. Hilton (concussion) will miss the game after being hurt against Tennessee. Star guard Quenton Nelson (toe) didn’t participate in Tuesday’s walkthrough but is expected to play Thursday.

The Colts are clearly the better team, but I just don’t trust Wentz anymore. He makes too many dumb mistakes and his best receiver won’t play. The running game is good for Indy, but the Jets are not bad at stopping the run. This is probably my least favorite game on the Week 9 board, but I’ll take the Jets and the points.