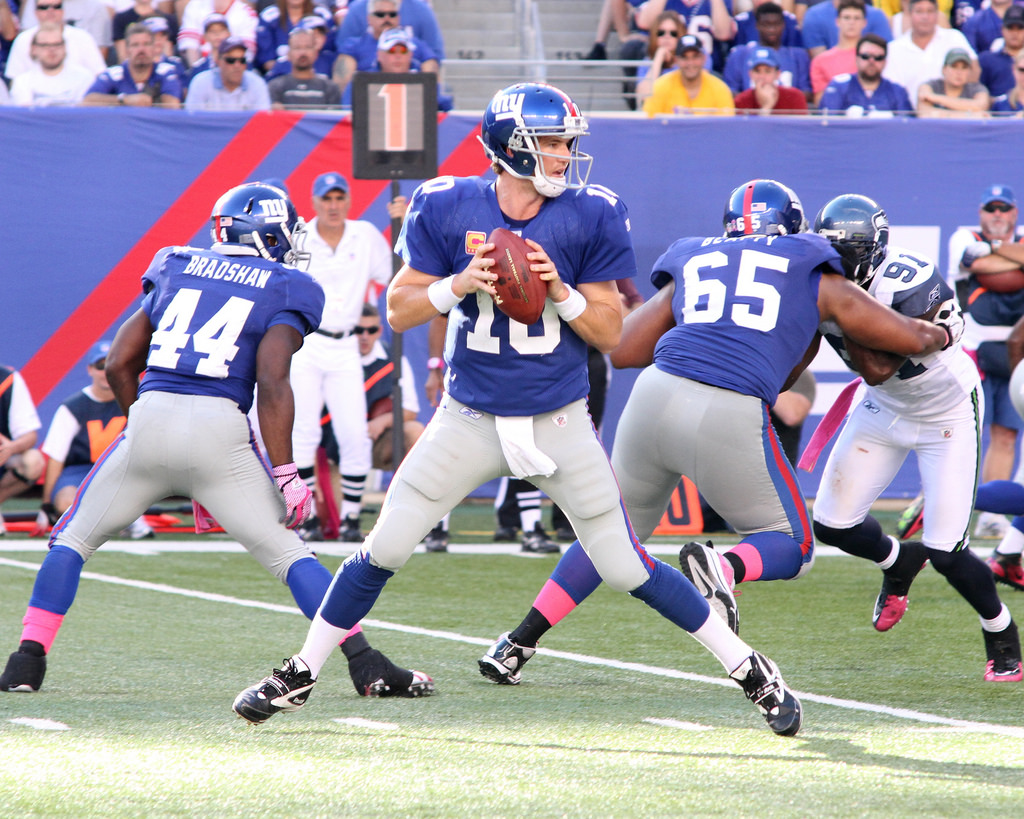 The first full Sunday of action in the NFL season ends with a terrific matchup between the New York Giants and Dallas Cowboys from AT&T Stadium. The big news surrounding this game is the off, now on availability of Dallas running back Ezekiel Elliott. The second year pro was suspended for six games by the NFL due to allegations of domestic violence, but Elliott filed a temporary restraining order to block the ban. A judge has now ruled that Elliott can play until another hearing, which probably won’t take place until after the season. Elliott, who led the league in rushing with 1,631 yards as a rookie last season, will now play on Sunday. The Giants have their own superstar who’s been questionable to play in this one, but has nothing to do with off the field problems. Wide receiver Odell Beckham Jr. missed practice Wednesday and Thursday due to a left ankle injury sustained in a preseason game against Cleveland. The Giants swept Dallas last season and have won three straight in the series.

New York rebounded from three consecutive losing seasons to earn its first postseason berth since 2011, sparked by a defense that led the NFC with an average of 17.8 points allowed and ranked fourth in the league against the run. Quarterback Eli Manning, entering his 14th season, threw for 26 touchdowns and 16 interceptions while reaching 4,000 yards for the sixth time despite a running game that averaged only 88.3 yards and produced a league-worst six rushing touchdowns. Manning also completed 63% of his passes for only the second time in his career (2014). While second-year running back Paul Perkins takes over as the starter, the Giants added key pieces to the passing game by signing six-time Pro Bowler Brandon Marshall and making rookie tight end Evan Engram their first-round draft pick. Marshall caught 109 balls for 1,502 yards and 14 touchdowns two season ago, but lack of a decent quarterback for the Jets last year, slowed his production (59 catches, 3 TDs). Beckham is coming off another huge season, scoring 10 times and catching a career-best 101 balls. Beckham’s 288 career receptions are tied for the most by a player in his first three seasons.

Elliott had a terrific rookie campaign, but wasn’t the only Dallas rookie to make a spectacular entrance into the NFL. Quarterback Dak Prescott stepped in for the injured Tony Romo and threw for 23 touchdowns against only four interceptions and compiling a 104.9 passer rating. Elliott was the focal point of the offense, getting at least 20 carries in 12 games while rushing for 15 touchdowns and going over 100 yards seven times, but was held to 162 yards on the ground in two meetings against the Giants. A healthy Dez Bryant will be a big boost for the Cowboys as he was limited to 81 catches combined over the past two seasons after hauling in at least 88 receptions in each of the previous three years. TE Jason Witten has at least 60 catches in 13 straight seasons and has 13 TDs in 28 games versus New York. Linebacker Sean Lee was third in the league with a career-best 145 tackles last season for a defense that will be missing three defensive linemen due to suspension.

There’s a lot of uncertainty surrounding this game with Dallas missing key defensive lineman, Elliott’s focus and preparedness for this game, and Beckham’s injury status. Either way, the Giants seem to play their best against the Cowboys and have covered five straight in the series and six of eight in Dallas. Look for a big night from Manning and whoever he throws the ball to. I’ll go with the rest of the public on this one and take the G-Men.