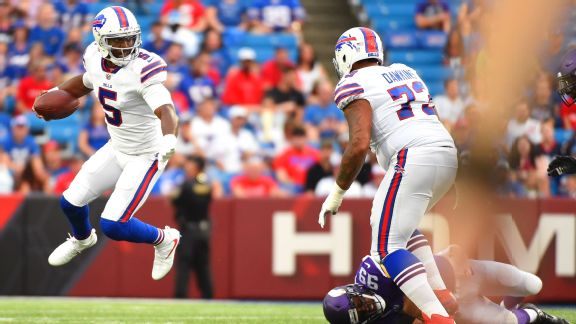 The Buffalo Bills and Philadelphia Eagles both looked poor in their preseason openers last week and will be look for their first victory of the 2017 season when they meet on Thursday night in Philadelphia. The Bills dropped a 17-10 home decision to the Minnesota Vikings while the Eagles went on the road and lost 24-9 in Green Bay. These teams were involved in some dealing over the weekend as the Bills sent top wide receiver Sammy Watkins, and top cornerback, Ronald Darby, in separate deals with the Los Angeles Rams and Eagles. In exchange, the Bills acquired Philadelphia wide receiver Jordan Matthews, Rams cornerback E.J. Gaines, as well as second- and third-round picks in 2018. It’s not only a downgrade at the wide receiver position for Buffalo, but Matthews was injured Sunday in his first Buffalo practice, suffering a chip fracture in his sternum.

Bills starting quarterback Tyrod Taylor played three series and hit 5 of 8 attempts for 46 yards in last week’s loss in Minnesota. Wideout Anquan Boldin did not play after participating in just one practice after signing a one-year contract last Monday. He should get some playing time on Thursday, especially with no Matthews. Running back LeSean McCoy also didn’t play, but could see some action against his former team. Rookie quarterback Nathan Peterman got plenty more reps than presumed backup T.J. Yates, with Peterson going 13-for-25 for 112 yards and a TD. That could mean he’s passing Yates on the depth chart behind Taylor.

The Eagles were losers in Green Bay last week even though Packers starting quarterback Aaron Rodgers didn’t take the field. Philadelphia second-year starting QB Carson Wentz played one series and was 4-for-4 for 56 yards passing and a touchdown. The team’s big free-agent offseason addition, former Bears receiver Alshon Jeffery, didn’t play in Week 1, but is expected to make his debut on Thursday. 2017 first-round pick Derek Barnett, the 14th overall selection out of Tennessee, had two sacks in the first half in his debut against Green Bay. Darby, who was the runner-up for NFL Defensive Rookie of the Year in 2015, has been lining up at left corner with the first-team defense in practice and is expected to play on Thursday.

We’re still just in Week 2 of the exhibition games, which means the stars won’t play a ton. As a rule, I usually don’t lay more than a field goal in preseason games outside of Week 3. I’ll stick to that strategy here in this one.