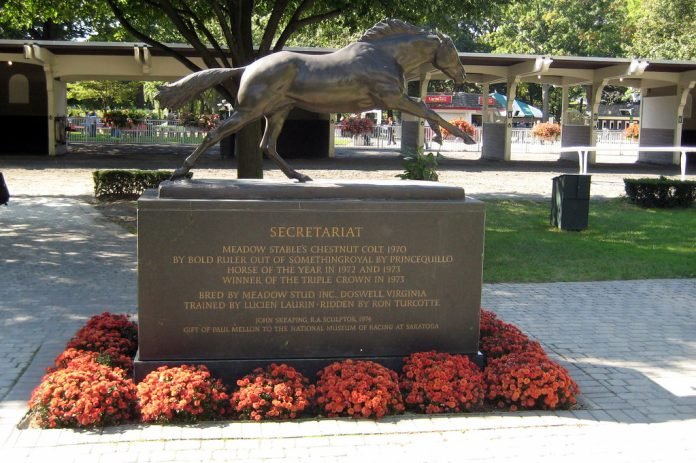 The Kentucky Derby is the oldest horse race in America. The first running took place at Churchill Downs in 1875, and it has become a major event in American sports culture. It’s a tradition that dates back over 150 years. Only the finest thoroughbreds compete in the first leg of the iconic Triple Crown races.

Here are five of the fastest Kentucky Derby winners of all time who have set impressive records for their speed and agility. There is a strong bond which needs to be achieved between the horse and their rider. Some of the most successful racers have demonstrated this, and it is essential that this is achieved by future racers in order to set more record times.

Firstly, Secretariat was a record-breaking winner at the Kentucky Derby in 1973, whose time is still the one to beat today. Although his starting position put him at a disadvantage, this champion finished every quarter mile faster than the last.

This racer had already shown his elite level of skill after finishing the Wood Memorial Stakes in third place. However, paired with jockey Ron Turcotte, the team made history. Moving through the Run For The Roses at record-breaking speed, the pair made the whole thing look effortless.

Although Secretariat went on to win the Triple Crown, his achievements at that year’s Kentucky Derby stood out. Making the entire event appear seamless was definitely something that helped secure this racer’s reputation as one of the best American racehorses of all time.

The standard for thoroughbreds still comes down to Secretariat, although more and more racers are making their own attempts at this. Check out how to bet on the kentucky derby for the latest developments and current odds.

2001 was a huge year for Monarchos, who took an attempt at Secretariat’s record time. Having already won the Florida Derby, Monarchos kept spectators on the edge of their seats until the last turn of the Churchill Downs.

It was here that the horse came into his own and went from thirteenth position all the way to first. Monarchos made headlines with jockey Jorge Chavez for their bond, which contributed to their immense achievements that year.

Monarchos is still considered the second-fastest thoroughbred of all time, and is widely celebrated in the Kentucky Derby records. It’s no wonder why he made headlines and truly stole the show in 2001 with Chavez.

Before Secretariat, there was Northern Dancer, who held the record speed at Churchill Downs until 1973. Although he had a relatively short career, Northern Dancer achieved an enormous amount.

He was one of the top sires in the twentieth century, and was father to the English Triple Crown winner in 1970. The 1964 Kentucky Derby was, however, Northern Dancer’s finest hour. He was the first Canadian-bred horse to win the Kentucky Derby, and his achievements can be seen in the Canadian Sports Hall Of Fame.

Setting the time at two minutes exactly, this thoroughbred’s speed was unmatched at the time. While later generations of champions shaved some time off this record, Northern Dancer’s dynasty lives on, with many of the current racers being blood relations of this stud.

Another huge record-breaking performance came from Spend A Buck in 1985. The racer made light work of the Churchill Downs, and was way ahead of his competitors until the very end.

There was some controversy within the horse racing community caused by the racer skipping the Triple Crown shot and opting for the $2.6 million bonus of the Jersey Derby. However, Spend A Buck finished the 1985 Kentucky Derby more than five lengths ahead of the other racers, which was highly impressive.

Something which made the racer stand out was the way that he made the route appear effortless, while finishing with a time that almost broke the two-minute mark.

Finally, Decidedly is one of the most impressive Kentucky Derby Winners who walked, so future champions could run. 1962 saw a gray horse emerge from the shadows and set the record time for Churchill Downs.

It’s no wonder that this was a record-breaking horse, as he was sired by the previous Kentucky Derby winner in 1954. Decidedly’s racing career peaked when his record time was set in 1962.

Although his record-breaking achievements happened decades ago, this racer still holds the fifth-fastest time around the Churchill Downs. Paired with jockey Bill Hartack, the team made light work out of the Kentucky Derby, and secured the $120,000 prize money that year. Decidedly remains one of the most impressive thoroughbred racers of his time.

The Kentucky Derby is one of the most iconic races to this day, with many thoroughbreds working hard to break speed times and set their own records. Not only that, but they need to have a strong relationship with their rider in order to be successful.

This has been demonstrated by some of the most successful champions who made headlines at the Churchill Downs. Because it is a prestigious place with a great deal of history when it comes to horse racing, many visitors dress in their finest clothes when they are attending the Kentucky Derby.

This can be a symbol of good luck, and is a way of keeping traditions alive. Some of the most successful racers set the Kentucky Derby decades ago, and are still being widely celebrated to this day.

Horse racing is a highly competitive sport which requires a great deal of discipline, mutual respect, and agility. Jockeys and the racers need to train hard in order to have a chance of setting new records and reaching personal bests.