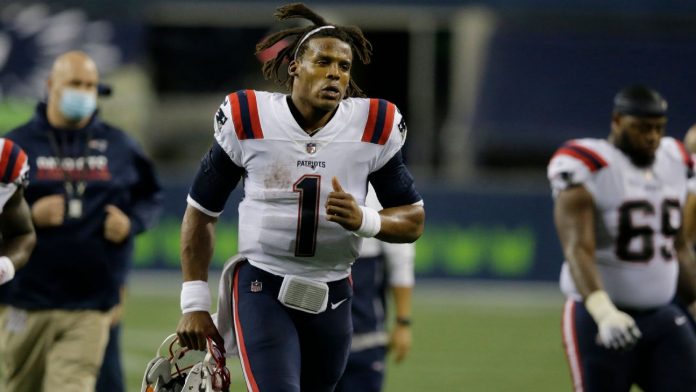 The San Francisco 49ers and New England Patriots each won their respective divisions in 2019, but have a lot of work to do just to get back to the postseason. Former New England quarterback Jimmy Garoppolo leads his 49ers into Foxborough on Sunday afternoon to take on a Patriots team that has dropped each of their last two games. Expectations were high again for both teams this season, but neither has come close to meeting them so far, with suspect quarterback play being an issue. The 49ers rode Garoppolo to a 24-16 home win over the Los Angeles Rams on Sunday night, going 23-for-33, 268-yards and three-touchdowns. For the first time since 2000, the Patriots don’t have either Brady or Garoppolo on the roster and have a losing record five or more games into a season for the first time since 2001. Cam Newton got New England off to a good start with two wins in the first three games, but missed the next after testing positive for Covid-19. The Patriots went on to lose 26-10 to Kansas City. Newton then went 17-for-25, for 157-yards and two interceptions in last week’s 18-12 home defeat versus Denver.

It’s just the 14th meeting all-time between these clubs, with New England winning 30-17 in 2016. Colin Kaepernick outdueled Tom Brady during San Francisco’s last trip to Foxborough back in 2012 with the 49ers winning 41-34. The Patriots are 4-1 ATS in the last five meetings and the home team has won each of the last three. New England is 41-16 ATS under Bill Belichick after a straight-up loss. Oddsmakers opened San Francisco as 5.5-point underdogs, but that has dropped to 2.5 as of Thursday afternoon.

At 3-3, Kyle Shanahan’s Niners are still in sole possession of last in the NFC West, but are 2-0 on the road and 5-1 ATS in their last six away from home. Unfortunately, the injuries are killing this team. Running back Raheem Mostert appears doubtful for Sunday, while offensive lineman Trent Williams, linebacker Kwon Alexander, and safety Jaquiski Tartt all missed practice Wednesday. One week after getting scorched by the Dolphins for 436 total yards, including 342 through the air, the 49ers limited Jared Goff to 198 passing yards and the Rams to a total of 311. San Francisco will be at NFC West rival Seattle next week.

The Patriots rank 25th in points per game with 21.8 and will face a 49ers team that ranks in the top five in yards per game against. New England’s running game ranks second in the league at 167.2 yards per game, despite no running back reaching 20 yards in Week 6. Last week, the team had to go through a COVID-19 ordeal that limited their practice time and forced them into an unscheduled bye. The Patriots are third in the NFL with a 49.9 rush play percentage. Belichick hopes to get more from star slot receiver Julian Edelman this week after a knee injury has limited him to a total of seven catches in the past three games. The Patriots were even better defensively against Denver, holding the Broncos to 299 total yards.

New England is much better than their 2-3 record and Belichick knows every strength and weakness of Garoppolo. With a full week of practice, the New England offense should be more efficient than they were last week against Denver. San Fran played well last week, but I still sense some issues with this team. I’ll lay the points.