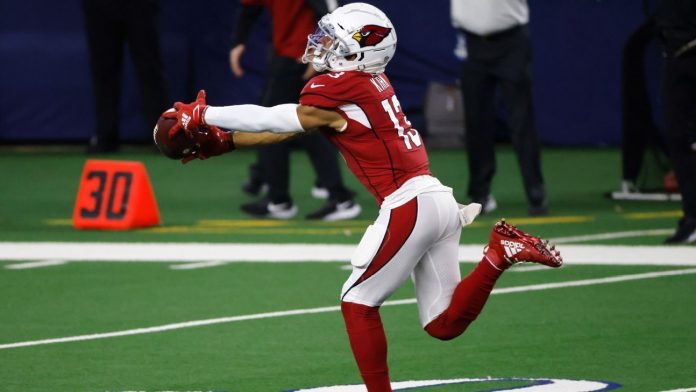 Russell Wilson and Kyler Murray are two of the most exciting players in the NFL and will get to showcase their talents on Sunday Night Football thanks to being flexed into the prime time game. The NFL on Thursday moved the game in Glendale after an outbreak of COVID-19 on the Las Vegas Raiders, who were originally scheduled to play Tampa Bay in prime time. The Seahawks are off to a perfect 5-0 start, but will play their first NFC West opponent in the 4-2 Cardinals. The Seahawks had a bye last week while the Cardinals come into the game on short rest following a 38-10 triumph at Dallas on Monday night. Three of Seattle’s victories have come down to the final 15 seconds including a dramatic 27-26 win against the visiting Minnesota Vikings in Week 5.

Pete Carroll is 7-3 coming off the bye with Seattle, and his team has also won 10 of their last 12 road games. Arizona is 6-2-1 ATS in their last nine and play well as a home dog, going 11-4-2 ATS since the beginning of 2019. The Cardinals are 5-1-1 ATS in the last seven meetings including three outright upset victories. Seattle is a 3.5-point road favorite with a total set at 55.

Wilson is leading the NFL in touchdown passes with 19 and an impressive 129.8 quarterback rating. DK Metcalf is having a banner season as Wilson’s top target, hauling in 496 yards and five touchdowns. He had 93 receiving yards and two touchdowns on six catches against Minnesota in Seattle’s last game. The Seahawks are fourth in the NFL with 280.4 passing yards per game and tops with an average of 33.8 points per game. The Seahawks hoped to have All-Pro safety Jamal Adams back following the bye after he sat out the previous two games with a groin injury, but he has missed practice this week. Seattle is dead last in passing yards allowed at 370.4 per contest. Safety Lano Hill (back) was placed on injured reserve and veteran Demarious Randall was promoted from the practice squad.

Murray completed just 9-of-24 passes against the Cowboys but two went for touchdowns, including an 80-yarder to Christian Kirk that gave Arizona a 21-0 lead. Murray also rushed for 74 yards and a TD. Wideout DeAndre Hopkins leads the NFL in receptions (47) and receiving yards (601). Arizona didn’t need Murray’s arm on Monday after rumbling for 261 rushing yards against Dallas, with Kenyan Drake running for 164 and two touchdowns, including a late 69-yard score. Budda Baker, the league’s highest-paid safety, had seven tackles, one sack, two quarterback hits, and an interception on Monday. Arizona ranks 13th in total defense with just 346.2 total yards surrendered per game. The Cardinals’ defense, which gave up the most total yards in the league last season, forced four turnovers against Dallas.

The Cardinals are good home dog the last two years and always play Seattle close no matter who the quarterback is. Murray should be able to have his way against a porous Seahawks defense on Sunday night and keep this one close, if not pull out a victory.