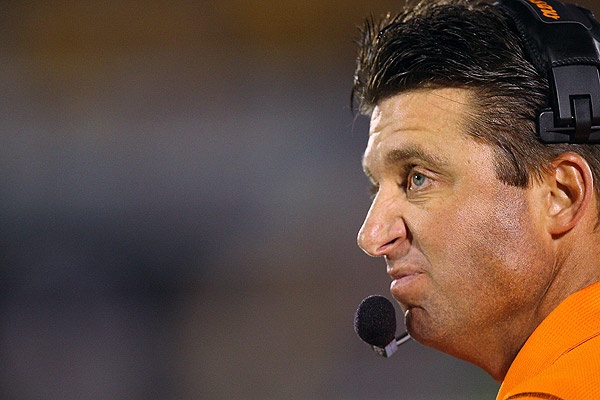 The lone undefeated team left in the Big 12 Conference takes the field Saturday, as the sixth-ranked Oklahoma State Cowboys hosts the No. 17 Iowa State Cyclones in Stillwater, Oklahoma this Saturday. Both teams comes into this contest with three-game winning streaks and Iowa State will go for its first 4-0 conference start in school history. The Cyclones opened the season with a 31-14 home loss to Louisiana, but then got conference play started with a win at TCU. They then shocked Oklahoma before beating Texas Tech two weeks ago. Iowa State is tied atop the Big 12 standings with Kansas State at 3-0, with the Cowboys right behind at 2-0.

The Cyclones are led by the backfield of quarterback Brock Purdy and running back Breece Hall. Purdy has completed 78-of-125 passes for 912 yards, with four touchdowns and one interception. Hall is second in the country, averaging 132.8 rushing yards per game and has gone over 100 in each game this season. Oklahoma State has an explosive running back of their own in Chuba Hubbard, who led the nation last year with 161.1 rushing yards per game. He is averaging 113.0 this season.

Oklahoma State has captured seven of the last eight meetings including a 34-27 win in Ames last season, but the Cyclones are 4-1 ATS in the last five meetings. The Cowboys are 12-4-1 ATS in their last 17 games overall and 5-1-1 in their last seven versus the Big 12.

The Cyclones got the week off after a 31-15 home win over the Red Raiders and have now scored over 30 points in each of the last three games. Purdy passed for 302 passing yards and two touchdowns without an interception on 32-of-43 completions. Although Hall leads the conference in rushing, he managed only 76 yards on 18 carries in last year’s 34-27 home loss to the Cowboys, but did score twice. He also had 42 receiving yards on six receptions, including one for 23 yards. The defense has recorded 13 sacks, led by 4.5 from Will McDonald and 3.5 from fellow defensive end JaQuan Bailey. Iowa State, which is 5-5 ATS in their last 10 road games, will be at Kansas next Saturday.

Oklahoma State has a bit of a quarterback controversy in season-opening starter Spencer Sanders and freshman Shane Illingworth. Sanders is healthy after being bothered by an ankle injury suffered in the season opener and the Cowboys have had two weeks off after last Saturday’s game was postponed due to Baylor’s rash of positive COVID-19 tests. Illingworth is 36-of-49 for 483 yards, three touchdowns and one interception. Head coach Mike Gundy hasn’t made a decision and it’s very possible they use both on Saturday. Wideout Tylan Wallace has 19 catches for 325 yards and two touchdowns on the season as the top outside threat. Oklahoma State hasn’t allowed more than 13 points in a game this season and is sixth nationally in total defense at 274.3 yards per game. After beating Tulsa, West Virginia and Kansas, the Cowboys will play a ranked team for the first time.

This will be a tight game, but ultimately the Oklahoma State defense will make the big plays and Hubbard will have a big game rushing the ball. I’ll lay the points here with the Cowboys at home.