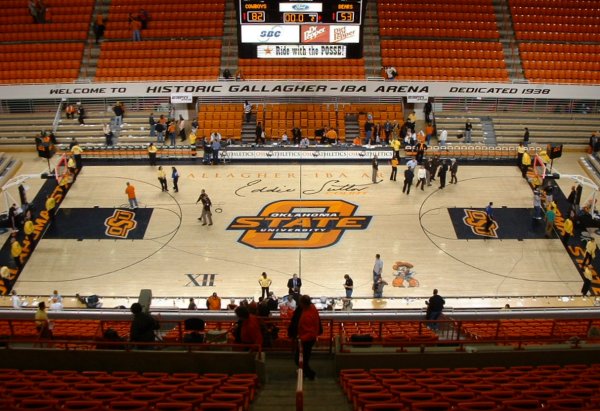 It’s been a rough season for the Oklahoma State Cowboys, but they have a chance to break an eight-game conference losing streak on Monday when they host the injury-plagued and fading TCU Horned Frogs at Gallagher-Iba Arena. The Cowboys are in unfamiliar position at the bottom of the Big 12 standings, and their offense – despite solid 3-point shooting – has been horrendous, ranking 299th in Division I at 67.8 points a game. Six of their last eight conference losses have been by nine points or more including Saturday’s 69-57 setback at Texas as leading scorers Cameron McGriff and Lindy Waters III were held to a combined 10 points on 4-of-14 shooting. The Horned Frogs are in a free-fall thanks to a roster that has been hit hard by the injury-bug. TCU is coming off a 71-62 home loss to Oklahoma on Saturday, and in the process, lost their fourth player to a season-ending injury in Lat Mayen (knee). They were also without second-leading scorer Kouat Noi (ankle), as TCU dropped just their third home game all season. The Horned Frogs shot just 35.4 percent from the field and allowed the Sooners to make half their shots. TCU has allowed opponents to shoot 46.7 percent from the floor in Big 12 play – second-worst in the league. The Cowboys lead the all-time series 25-7, but the Horned Frogs won the first meeting this season 70-68.

In the first meeting versus Oklahoma State, JD Miller drove the length of the court in the final five seconds and converted a baseline jumper, while Desmond Bane scored 26 points and Alex Robinson added 11 assists for TCU. Miller recorded 14 points and 11 rebounds, while freshman Kendric Davis contributed 14 points, six steals and four assists in his first start, but the team took a season-high 32 3-point shots – making just nine. Bane leads the team in scoring at 14.9 points per game and adds 5.5 rebounds and 2.7 assists while Robinson contributes 12.8 points and 7.1 assists. Davis is averaging 17.3 points, five assists and 3.3 steals in 32.7 minutes over the past three games.

Yor Anei scored 20 points and Isaac Likekele had 17 for Oklahoma State in the loss to TCU earlier this season, and the latter added 16 points and six rebounds in the Cowboys loss at Texas on Saturday. McGriff is the leading scorer (13.2) and rebounder (7.6) and has also recorded seven double-doubles, while Waters (11.9 points) leads the conference in free-throw-shooting (92.4 percent) and ranks second in 3-point percentage (45.1). Thomas Dziagwa posted career highs of 23 points and seven 3-pointers against Texas – the most 3-pointers in a game for the Cowboys since 2012 – and is third in the Big 12 in 3-point percentage (44.6).

The Cowboys have had a rough season, but TCU is ripe for the picking right now. Oklahoma State played well in the first matchup at TCU and will do just enough to keep this one close, or possibly win it. The game won’t be pretty, but should be close.