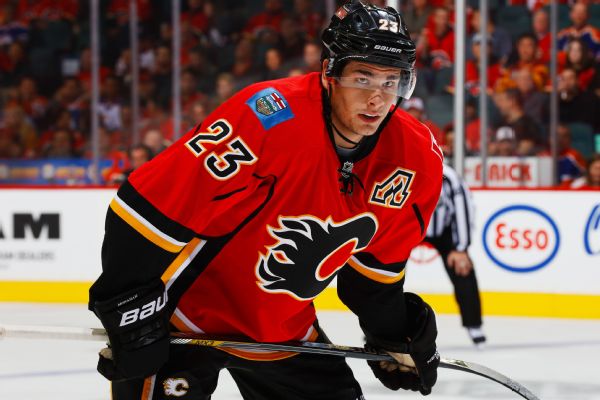 If you’re not staying up late to watch Western Conference NHL action, you’re missing quite a bit of intensity and excitement each and every night. All 15 teams are still very much alive in the race for the eight postseason spots and two teams near the top will get set for a physical rematch on Thursday night, north of the border. The Calgary Flames lead the Pacific Division by four points over tonight’s opponent, the San Jose Sharks. These teams last met on New Year’s Eve and the 8-5 Calgary win ended with a lot fireworks. Flames forward Sam Bennett’s hit on defenseman Radim Simek (see video below) set off several altercations that resulted in a combined 64 penalty minutes over the last 41 seconds of the game. San Jose has won 10 of their last 13 including an impressive overtime win at Winnipeg on Tuesday, killing off a late third period Jets power play, then scoring shothanded in sudden death. Captain Joe Pavelski scored his team-leading 29th goal in overtime to give him eight points (three goals, five assists) in his last four games. Calgary is on a pretty good run of their own, going 9-1-1 in their last 11 including a 4-3 win at Carolina on Sunday. The teams have split their two meetings this season and the home team has won eight of the last 10.

Defenseman Brent Burns’ perfect pass to Pavelski on the 2-on-1 in overtime gives the big man a club-high 48 assists. Joonas Donskoi, who has three goals and an assist this season in two games versus Calgary, has been held off the scoresheet in four consecutive games. Logan Couture is riding an opposite streak with points in four straight after his power-play versus the Jets gave him six points in that span.

Johnny Gaudreau leads a talented Calgary squad in goals (29), assists (45) and points (74), while linemate Sean Monahan recorded a career-high five assists in the New Year’s Eve meeting against San Jose. Gaudreau and Matthew Tkachuk each scored two goals and set up two others in that heated contest as well. Forward Mikael Backlund has five points (three goals, two assists) in his last four games and also scored twice in the last meeting with the Sharks.

This should be a fun one here with what happened in the last game as these two teams are really starting to hate each other. I picked San Jose to win the Pacific Division, but I have to say, this Calgary team is for real and are terrific at home. The Sharks actually don’t play that well away from home (13-12-3) and only one team in the entire league has less losses than the Flames. San Jose could be getting a little road weary with this being their sixth road game in the last seven, including three overtime games in a row. Look for the home team to win for the ninth time in 11 meetings in this series.

Sharks are 7-1 in their last 8 after allowing 2 goals or less in their previous game.

Sharks are 6-1 in their last 7 vs. Western Conference.

Sharks are 6-1 in their last 7 vs. a team with a winning record.

Sharks are 4-1 in their last 5 games as an underdog.

Sharks are 4-1 in their last 5 games playing on 1 days rest.

Flames are 4-0 in their last 4 when their opponent allows 2 goals or less in their previous game.

Flames are 5-0 in their last 5 vs. Western Conference.

Flames are 6-1 in their last 7 games as a home favorite.

Flames are 5-1 in their last 6 home games vs. a team with a losing road record.

Flames are 6-2 in their last 8 games following a win.