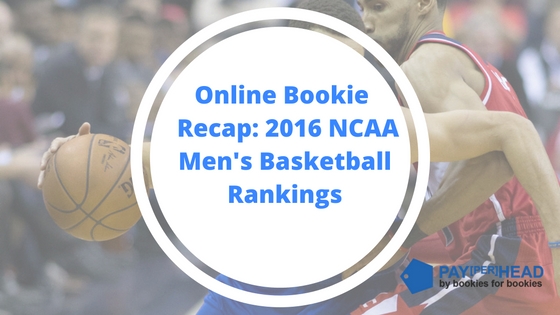 The 2016 NCAA Men’s Basketball Tournament ended with a great flourish. Here’s a recap of 2016 with some words about the season’s Top 4 ranked teams and their chances this upcoming season.

Online bookies should realize that Villanova is going to be a major favorite in NCAA Men’s Tournament futures. Pay per head tools like max betting limits should help temper some of the fervor around Villanova repeating this season.

Justin Jackson, Joel Berry II, Kennedy Meeks and Isaiah Hicks return this season. That gives Roy Williams another top hand in the ACC. Pay per head agents should expect plenty of wagers on the Heels to win the NCAA Tournament in 2017.

This season, Bill Self recruited hotshot California guard Josh Jackson. Jackson is too good to leave on the bench, meaning that the Jayhawks will likely start 3 guards. Pro NCAA Men’s Basketball bettors are going to jump on Kansas at what should be decent odds. Pay per head online bookies should make sure that max betting limits are in place.

Buddy Hield has gone on to the NBA. Although Jordan Woodward is a good basketball player, he, like everyone on this team, is up against it facing Kansas. Set max betting limits, but per head agents probably don’t have to worry too much about the Sooners winning the title this season.

4 Things to Know Before Betting on Your Favorite Team

How Not to Lose Another Cent on Football Betting