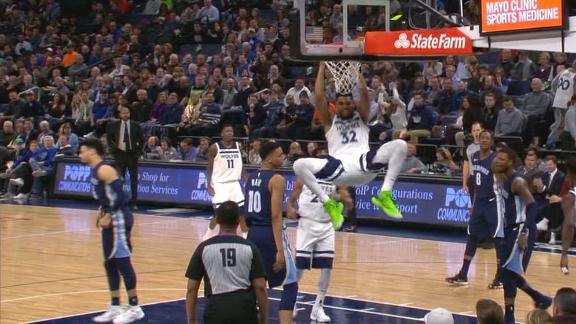 We have reached the final day of the 2017-18 NBA regular season and there is only one more spot in the 16-team postseason left to garner. The Denver Nuggets and Minnesota Timberwolves are tied for the final spot in the Western Conference and will go head-to-head in Minneapolis on Wednesday night in a win-or-go-home contest. The Timberwolves were as high as the No. 3 seed in the Western Conference at several points this season and could still finish as high as fifth with a win on Wednesday and some help, but they haven’t won more than two in a row since mid-January. They are currently on a two-game streak with wins over non-playoff teams the Memphis Grizzlies and L.A. Lakers. The pressure will be high as the Timberwolves have not qualified for the postseason since 2004. The Nuggets are streaking into this contest with wins in the last six games and have been playing playoff-type basketball for two weeks now. Denver managed to overcome an 11-point, second-half deficit and earn an 88-82 victory on Monday to stay alive (as we predicted), while holding Portland to 13 points in the fourth quarter. Denver snapped a four-game losing streak in the series with a 100-96 win last Thursday and is looking for its first victory at Minnesota since November of 2016.

Denver center Nikola Jokic has been a force during the Nuggets’ recent surge and recorded 15 points, 20 rebounds and 11 assists in Monday’s win for his second straight triple-double and 10th of the season. Jokic is averaging 23.7 points, 16 rebounds and 8.2 assists during the six-game winning streak but endured his worst shooting night of the stretch in the home win over Minnesota on Thursday, going 6-of-20 from the floor. Shooting guard Gary Harris is back from a knee injury that had him sidelined for 11 games but returned on Monday and collected 12 points in 18 minutes off the bench.

Veteran swingman Jimmy Butler returned from knee surgery to help Minnesota win their last two games. Butler played 23 minutes against the Lakers and the Grizzlies and averaged 16.5 points while going a combined 10-of-18 from the floor. Center Karl-Anthony Towns has been a double-double machine all season and recorded his eighth in nine games on Monday, scoring 24 on 11-of-14 shooting and bringing down 18 rebounds. Towns had 26 points and 13 boards in last Thursday’s meeting with Denver. Power forward Taj Gibson (neck) was limited to eight minutes on Monday and is questionable for Wednesday.

The Nuggets are really hot right now and they’re even winning games away from home. Denver is 5-1 against the spread in their last six road games and have covered 20 of the last 25 meetings in Minneapolis. I expect a very close, back-and-forth contest here tonight, but the Nuggets are the better team right now and will cover the three points or win the game outright.