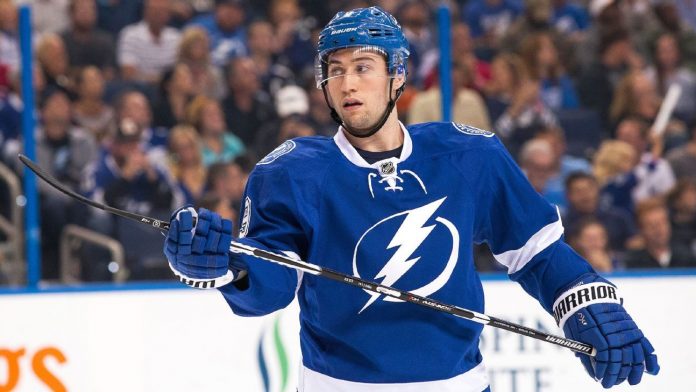 It’s going to be hard to top the drama that unfolded Saturday night in Long Island, but the New York Islanders and Tampa Bay Lightning will get back at it on Monday in a crucial Game 5 from Amalie Arena in Tampa, Fla. New York scored three times in the second period and then desperately held on for the 3-2 victory on Saturday to even their Stanley Cup playoffs semifinal series at two wins apiece. In the waning seconds, Tampa Bay’s Ryan McDonagh spun around to deke out New York goaltender Semyon Varlamov, but Islanders defenseman Ryan Pulock blocked the shot that appeared headed into the open net. This is now a best-of-three series with the Lightning having home-ice advantage. That might not necessarily be a good thing, as Tampa is just 4-3 at home, compared to 6-2 on the road this postseason. The Lightning also might want to make sure they tighten things up in the middle period. New York has outscored opponents 23-10 in the second period during the playoffs. amidst a strong outing.

Tampa Bay comes into Game 5 as a -185 home favorite with a total of 5 u30. So far, 66% of the betting public is on the underdog Islanders at +165. Despite picking up a win in Tampa earlier in the series, New York hasn’t fared well at Amalie Arena overall, going 4-9 straight up in their last 13 chances. The over has cashed in four of New York’s last five road contests.

Pulock potentially saved the entire series for the Islanders with that save. If you missed it, here it is:

Now, the Islanders could have still won in overtime, but all the momentum was on Tampa’s side. Being down 3-1 is tough to overcome. Josh Bailey, Mathew Barzal and Matt Martin all had second period goals in the win. It was Barzal’s sixth goal in his last eight games and Martin’s first of the postseason. New York had three goals from three different lines on Saturday with seven different players recording a point. Varlamov stopped 28 of 30 shots in the victory.

Brayden Point extended his postseason goal scoring streak to seven straight games and now leads the playoffs with 12 goals, but it wasn’t quite enough on Saturday. It was just Tampa’s second loss in their last eight games overall. Point is now tied with Claude Lemieux (1997), Joe Sakic (1996), Mario Lemieux (1996, 1991) and Pat LaFontaine (1992) for the longest playoff goal scoring streak in the last 30 years. Pretty good company. Tyler Johnson had the Lightning’s other goal, while Andrei Vasilevskiy stopped 27 of 30 shots.

New York definitely has the momentum right now after that dramatic win on Saturday and Tampa Bay has not played as well at home as they have on the road. The Lightning are the better team, but -185 is too much to lay. New York is a live dog here.