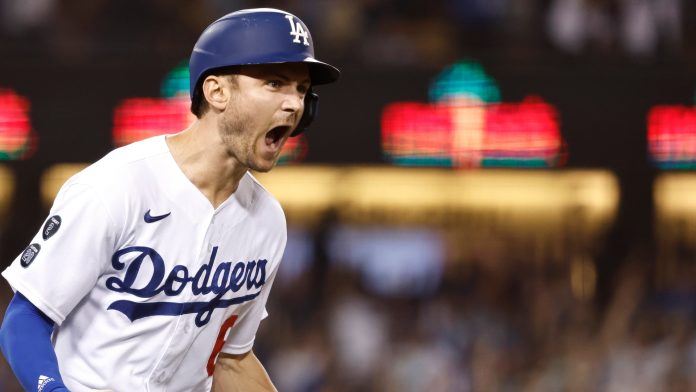 All eyes will be on Dodger Stadium Monday night as the National League Division Series between the San Francisco Giants and Los Angeles Dodgers comes down to a best-of-three duel. After edging out L.A. by one game during the regular season, the Giants dominated Game 1 of this series behind Logan Webb, but the Dodgers fought back hard in Game 2. L.A.’s bats came alive in Saturday’s 9-2 victory to even the series up at a game a piece. Tonight’s pitching matchup will feature Max Scherzer for the Dodgers against Giants lefty Alex Wood.

On Saturday, the Giants had just six hits, with two going for extra bases, and they scored just one run after the second inning. Four Dodgers relievers held the Giants to three hits while the L.A. offense exploded for five extra-base hits. The Giants won the regular season series 10-9 and took three of the last four at Dodger Stadium. Los Angeles is a big -200 favorite in this one with a total set at 7.

Wood has not pitched since Sept. 29 when he went six scoreless innings in a 1-0 win over the Arizona Diamondbacks. The lefty finished strong, allowing two earned runs or less in each of his last six starts. Wood pitched four scoreless innings in last year’s World Series for the Dodgers and faced them three times this season, going 0-2 with a 4.76 ERA. In 52 career appearances at Dodger Stadium, Wood owns a 3.05 ERA.

Scherzer went 15-4 during the regular season split between the Washington Nationals and Los Angeles. Since moving to the West Coast on July 30, the Dodgers are 11-0 when Scherzer starts including the wild card game last Wednesday. The righty did give up 11 runs in his last two regular season outings and one more against the Cardinals last week. Scherzer is 4-5 with a 3.84 ERA in 11 career regular-season starts against the Giants.

It’s a high price to lay, but there’s no way I can go against Scherzer in a game like this. I’m more confident in the Dodgers after the offense came alive the other night. I can still see a close game, so I’ll take the moneyline.