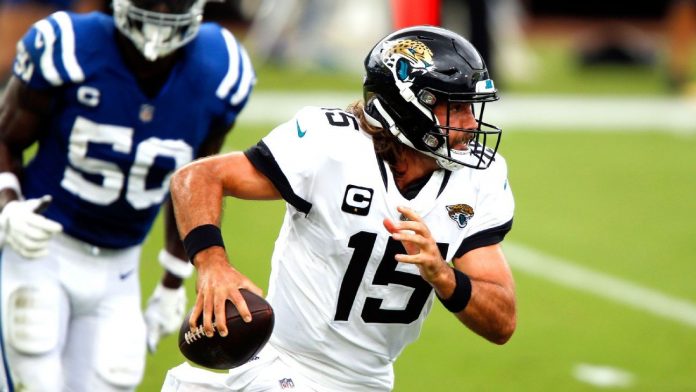 Two eccentric quarterbacks will be in the primetime spotlight Thursday night when Ryan Fitzpatrick and the Miami Dolphins visit Gardner Minshew and the Jacksonville Jaguars on Thursday Night Football to kick off Week 3. Minshew is off to a better start than Fitzpatrick, guiding Jacksonville to a perfect 2-0 ATS mark as 7-point underdogs over their first two games. The Jaguars upset the Indianapolis Colts in Week 1 and nearly did the same at Tennessee last week, falling 33-30. Minshew has fired three touchdowns passes in each of the first two games and has completed 75.4 percent of his passes for 512 yards. The Jaguars have been exceptional in the red zone with six touchdowns in seven opportunities. Fitzpatrick and the Dolphins are off to a slow start and Dolphins fans are eager to see the beginning of the Tua Tagovailoa era. Fitzpatrick passed for 328 yards, two touchdowns and no interceptions in Sunday’s 31-28 loss to the Buffalo Bills.

The Dolphins have one of the worst defenses in the league through two weeks, ranking 30th in total defense (440.5 yards per game) and 29th against the run (164 yards per game). That will be tested tonight when the Jaguars showcase undrafted free agent running back James Robinson. The former FCS star, who rushed for 4,444 yards and 44 touchdowns at Illinois State, has 164 rushing yards on the season – the most ever through the first two career games by a Jaguars back. He rushed for 102 yards and a touchdown on 16 carries in Sunday’s loss to the Titans. The teams met in the 2019 preseason but the last game that counted between them was in Week 16 of the 2018 campaign when the Jaguars upset the Dolphins 17-7 in Miami. Neither quarterbacks in that contest are still around. Blake Bortles has just signed with the Denver Broncos, while Ryan Tannehill is guiding the Titans offense. Jacksonville and Miami have split eight regular-season matchups overall both straight up and against the spread (ATS), while the total has gone under in six of those.

Miami allowed Buffalo to record 524 yards of total offense on Sunday – the Bills’ most since 2000 and top cornerback Byron Jones left in the first quarter with a groin injury and didn’t return. He is doubtful for playing on a short week. Fitzpatrick, who got sacked three times in Week 2, seems to have a favorite target in tight end Mike Gesicki. The former Penn State star recorded 130 receiving yards and a touchdown on eight receptions against Buffalo. Isaiah Ford and DeVante Parker had 76 and 53 receiving yards, respectively, on a combined 12 receptions. Four Miami players were limited at practice: safety Clayton Fejedelem (pectoral), cornerback Xavien Howard (knee), defensive end Shaq Lawson (hip) and receiver DeVante Parker (hamstring). Miami is 10-4 ATS in their past 14 as underdogs.

Jacksonville’s defense hasn’t been much better than Miami’s through two weeks, allowing 294 yards per game in the air, but have been much better against the run (105.5). Minshew has spread the ball around pretty well, as leading receivers DJ Chark Jr. and Keelan Cole Sr. have 109 and 105 yards receiving respectively through two games. On the injury front, center Brandon Linder (knee) and defensive back Brandon Watson (illness) were non-participants at practice on Tuesday. Jacksonville is 5-0 ATS in its past five September games, while the over is 3-0 in their last three games at home.

It’s the battle of two of the AFC’s worst, but I like what I’ve seen so far from Minshew and the Jaguars. Fitzpatrick makes way too many mistakes for my liking and Minshew really seems to like the national spotlight. The Jags are 5-0 ATS the last two Septembers. I’ll ride that trend and lay the field goal.