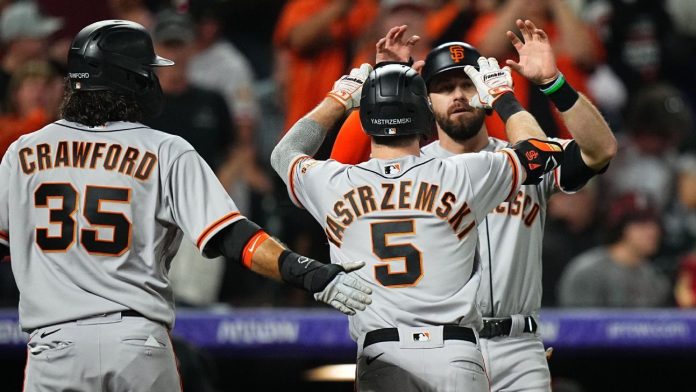 It comes down to one game for the two best teams in Major League Baseball. It’s a shame this has to be Divisional round series, but the intensity should be really high at Oracle Park as the San Francisco Giants host the Los Angeles Dodgers. San Fran edged out L.A. 10-9 in the season series and won the NL West by one game, thus getting a chance to host this winner-take-all Game 5 on Thursday night. The teams’ hottest pitchers will duel as Game 1 starter Logan Webb goes for the Giants against lefty Julio Urias of L.A. – both victorious in their lone starts so far this postseason. San Francisco had a chance to close out the series at Dodger Stadium on Tuesday night, but the offense failed to show, scoring just two runs in the 7-2 setback. San Fran has only scored nine runs in the first four games, however, pitching has carried them to two wins.

The Giants have captured the close games, winning 4-0 and 1-0, while the Dodgers recorded easy 9-2 and 7-2 wins. Neither team will have its starting first baseman available again, with San Francisco’s Brandon Belt (broken thumb) and Los Angeles’ Max Muncy (dislocated elbow) ruled out. The Dodgers bullpen is a little more rested having to go to the bullpen just seven times in the past two games compared to San Francisco’s 10 pitching changes.

The Dodgers have won 12 games in a row in which Urias has started included his gem in Game 2. The Giants went 0-for-5 with runners in scoring position in Urias’ five innings in that one. At home, Urias is 14-2 with a 2.67 ERA and the Dodgers are 16-3. This will be his seventh start this year against San Francisco and he’s allowed two runs or less in five of the six starts.

The Dodgers got just three baserunners into scoring position in Webb’s 7 2/3 innings in Friday’s Game 1 in what was his first postseason appearance. Webb has won 11 straight decisions dating back to May 11 and has allowed just one run in 13 2/3 home innings against Los Angeles this season.

These two pitchers aren’t household names, but their stats tell a different story. Both have been absolutely dominant since the All-Star Break and I don’t see how the offenses will get anything going. Pitching always seems to dominate a winner-take-all playoff game and this should be the case tonight. It’s a very low total, but I’ll take the under.