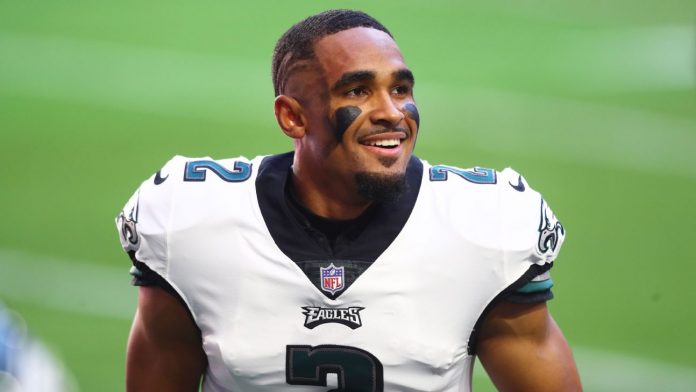 The road to possibly yet another Super Bowl for Tom Brady continues into Week 6 of the NFL season and a stop in Philadelphia this Thursday night to take on the Eagles at Lincoln Financial Field. This will be the second Thursday night game for Tampa Bay, who held off the Dallas Cowboys on opening night in Week 1, 31-29. Brady is showing no signs of slowing down and even accomplished a feat last week that he’s never done. The 44-year-old passed for over 400 yards and five touchdowns in a 45-17 triumph over the Miami Dolphins. That’s the first time he’s ever done that in his 22-year career. Though the Bucs have a losing record against the spread, their 4-1 straight-up mark puts them in great position to be the top team in the NFC come seasons end.

The Eagles meanwhile, snapped a three-game skid with a 21-18 road victory at the Carolina Panthers last week. Quarterback Jalen Hurts continues to develop his skills with a talented, but young receiving corps. The defense for Philly came up big last week as Darius Slay intercepted two passes and cornerback Steven Nelson picked off one as Philadelphia recovered from a 15-3 deficit late in the second quarter. Hurts put the Eagles up for good with 2:38 to play on a 6-yard touchdown run.

The Eagles are 10-9 all-time vs. Tampa Bay including playoffs, but dropped the last meeting 27-21 in 2018. The quarterback battle that day was Ryan Fitzpatrick vs. Nick Foles – both long gone from their respective teams. The underdog is 6-2 against the spread in the last eight meetings and Tampa Bay comes into this contest as 7-point favorites. The total is set at 52.5 and five of the last seven meetings have gone over.

Brady has plenty of weapons to distribute the ball to and last Sunday was no exception. Antonio Brown caught seven passes for 124 yards and two scores and became the fastest player in history to reach 900 career receptions. Fellow wideout Mike Evans caught six balls for 113 yards and two scores. Tight end Rob Gronkowski sat out a second straight game with fractured ribs and is doubtful to play Thursday. Brady leads the NFL with 1,767 passing yards and ranks second with 15 touchdown passes and has not thrown an interception in a franchise-record 203 pass attempts. The defense is ranked No. 1 in the league against the run, but you can pass on this team. The Bucs rank dead last against the pass, allowing 314.4 yards per contest. Safety Antoine Winfield Jr. missed Week 5 in concussion protocol but could return here. Tampa Bay will be without linebacker Lavonte David (ankle), who was injured against the Dolphins and is expected to miss multiple games. The Bucs are short-handed in the secondary with cornerbacks Carlton Davis (quadriceps) and Sean Murphy-Bunting (elbow) both on injured reserve.

Philadelphia was expected to have a tough time moving the ball last week against a tough Carolina defense. Hurts passed for just 198 yards with an interception but did have two rushing touchdowns. Philly only had 273 yards but also allowed just 267 and picked off Sam Darnold three times. Pro Bowl right tackle Lane Johnson missed the game for a personal matter and it’s not clear if he’ll play Thursday. Rookie wide receiver DeVonta Smith had 77 receiving yards on seven catches and eight targets in Week 5 and can be a threat to Tampa Bay’s banged-up secondary. The Eagles placed tight end Dallas Goedert on the COVID-19 list on Tuesday, meaning he probably won’t play. The Eagles are 5-0 ATS in their past five as home dogs.

After getting scorched in back-to-back weeks, the Eagles defense stepped up big time against Carolina. Though it won’t be as easy against Tampa Bay, I do think the defense can come up with some big stops and a turnover or two. Hurts and his talented wide receivers should have some success against this poor Tampa Bay pass coverage and keep it close. I’ll take the points.