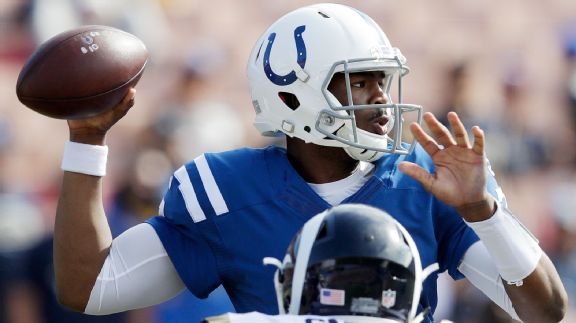 Week 1 NFL lines have been out since the beginning of summer and none of them have moved more than the Indianapolis Colts vs. Los Angeles Chargers game – and for obvious reasons. Colts’ franchise quarterback Andrew Luck abruptly announced his retirement on August 25th, moving the game from Chargers -3 to -6.5 as of Friday night. Luck’s retirement has moved odds all over the league from season win totals to a big shift in the AFC South odds to win division. The total for this contest opened at 48.5 and is all the way down to 44.5. That should be enough motivation for new starting quarterback Jacoby Brissett and the rest of this Indianapolis team as they start on the road in Carson, Cal. against the Chargers. San Diego hasn’t had a quarterback issue since Philip Rivers took over in 2006 and the veteran has started every game since. The big question for the Chargers is the holdout of running back Melvin Gordon, who may never suit-up for this franchise again. The Colts are 6-2 ATS in their past eight games as underdogs of six or more points, though Luck was at the helm for those games. Meanwhile, the Chargers covered just two of their seven games as a home favorite in 2018, while losing three of them outright. The teams last played in 2016 with the Colts ending the Chargers three game winning streak in the series.

Brissett is the man for now, but the Colts signed Brian Hoyer to be the backup, but head coach Frank Reich and general manager Chris Ballard are confident in their decision. “Jacoby Brissett is a winning football player in this league, and he is a rare, rare, leader,” Ballard told reporters. “He is a rare human being, man. That locker room loves Jacoby Brissett.” Brissett started 15 games for Indianapolis in 2017 when Luck was sidelined and passed for 3,098 yards and 13 touchdowns against seven interceptions. The Colts possess one of the best offensive lines in the league and have some skill around them in running back Marlon Mack and wide receiver T.Y. Hilton. The defense is solid and added pass rusher Justin Houston, who had 22 sacks in 2014 and 78.5 overall in eight seasons with the Kansas City Chiefs.

Without Gordon in the backfield, the Chargers will go with Austin Ekeler and Justin Jackson in Week 1, with Jackson (206 rushing) expected to handle early downs and Ekeler (554 rushing, 404 receiving) in for the passing-down snaps. Rivers has put together six straight 4,000-yard seasons and 10 overall and he is 26 touchdown passes away from becoming the sixth player in NFL history to reach 400. The defense will be missing a key piece as well with standout safety Derwin James (foot) out for at least a large part of the season and will rely heavily on star defensive end Joey Bosa (28.5 sacks in 35 career contests).

I think oddsmakers and bettors are overreacting a bit to Luck being out. Yes, he’s better than most quarterbacks in the league – when healthy – but this isn’t a bad Colts team either. The offensive line is terrific, the defense is getting better, and now they have extra motivation since people are writing them off. I’ll take the 6.5 points here against a team with really no homefield advantage and their inability to cover games as a favorite.