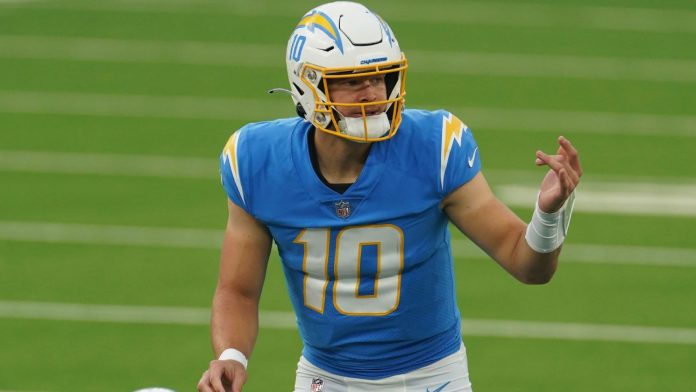 A big game involving two potential AFC playoff teams takes place this Sunday afternoon at Paul Brown Stadium in Cincinnati, Ohio as the Bengals host the Los Angeles Chargers. Both teams trail in their respective divisions by one game. The Chargers would not make the playoffs if the season ended today because they lost last week at Denver and the Broncos now own the tiebreaker with Los Angeles. The 28-13 loss in Mile High last week came on the heels of a wild 41-37 win for the Chargers over the Pittsburgh Steelers. It has been an inconsistent season for L.A., who have not won back-to-back games since the beginning of October, going 1-5 ATS since. The Chargers lead the all-time series 21-14 and have won two straight against the Bengals, including 16-13 in the 2020 season opener. No. 1 overall selection in the 2020 NFL Draft was Justin Herbert, but he backed up Tyrod Taylor in that, while No. 6 overall pick Joe Burrow made is debut for Cincinnati.

The Bengals seemed to have put their midseason struggles behind them for now with wins in back-to-back games in convincing fashion. After an embarrassing 41-16 loss at home to the Cleveland Browns, Cincy went to Las Vegas and pounded the Raiders 32-13 before coming home and destroying the Pittsburgh Steelers 41-10. This is the third two-game winning streak of the season for the Bengals, who have yet to win three in a row. They sit one game behind the Baltimore Ravens in the crowded AFC North standings, but own the tiebreaker currently against them by virtue of their win in Maryland in October. The Bengals are just 3-8 ATS in their last 11 following a straight-up win.

Herbert threw for 303 yards and two touchdowns against Denver last week but had two costly interceptions as well. The offense was much better the week before against Pittsburgh with Herbert throwing for 382 passing yards and three TDs against just an interception on 30-of-41 completions while also leading the Chargers with 90 rushing yards on nine carries. Herbert ranks fourth in the NFL with 3,230 passing yards and fifth with 24 touchdown passes. Austin Ekeler (604 rushing yards, 14 total TDs) was held to 31 yards rushing in the loss to Denver last week. Keenan Allen leads the Chargers with 81 catches for 895 yards, but just two touchdowns. Cornerback Asante Samuel Jr. (concussion) and safety Alohi Gilman (quad) did not participate in practice on Wednesday. L.A. has the worst run defense in the league, which could mean trouble this week.

Cincinnati was supposed to finish last in the AFC North this season, but they have exceeded everyone’s expectations behind an improved Burrow, who is the league’s No. 1 passer against the blitz. Burrow also leads the AFC with a 101.6 passer rating this season and threw for 190 yards and a touchdown against one interception on 20-of-24 passing. Running back Joe Mixon has rushed for two touchdowns in each of his last three games and has posted at least 123 rushing yards in each of the last two. The Bengals run defense was great last week versus the Steelers, limiting Najee Harris to 23 total yards. Defensive end Trey Hendrickson (10.5 sacks) has at least one sack in seven straight games and leads a revamped and vastly improved defense. The Bengals rested seven players on Wednesday, but coach Zac Taylor believes both offensive tackle Riley Reiff (ankle) and center Trey Hopkins (ankle) will be available.

I like this Cincinnati team and it starts with their defense, which is not getting talked about enough. They have allowed just 23 total points the last two weeks and will give Herbert fits. Look for Mixon to have a big game against a Chargers run defense that ranks last in the league.