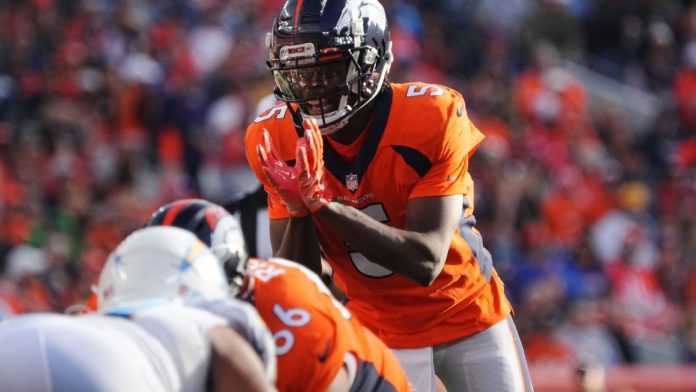 The AFC West Division is still up for grabs and every team in it is above .500 heading into Week 13. Two of those teams will meet on the field Sunday night in a game flexed-in by the league in place of San Francisco vs. Seattle. Not that long ago, the Chiefs were struggling and sat in last place in the division, but have come alive to reach 7-4 and lead by one game over the L.A. Chargers, Las Vegas Raiders and this week’s opponent – the Denver Broncos. The Chiefs have all the sudden won four in a row, although only one was easy – a 41-14 win at Las Vegas in Week 10. Kansas City had a bye after their 19-9 home victory over the Dallas Cowboys on Nov. 28 and seem poised to win another division crown. Much of the success can be attributed to the defense, which has surrendered 17 points or less during the winning streak.

The Broncos earned their first division win last Sunday with a 28-13 upset at home of the Chargers and their defense is playing solid as well. Denver has allowed 17 or less in four of its last five games and are on a 3-1 ATS run. Denver has not fared well recently in this series and that’s being nice. Kansas City has won 11 straight by a combined 323-180. Denver has been swept in the season series five straight year, but were competitive at Arrowhead Stadium in 2020, losing 22-16. Harrison Butker had five field goals for KC and Patrick Mahomes threw for 318 yards and a touchdown. Drew Lock was the Denver QB and had two touchdown passes but also two picks. Lock shouldn’t is now backing up Teddy Bridgewater. These teams play again Week 18 in Denver and the road team is 6-1 against the spread in the past seven meetings.

Denver’s last two wins have come as outright underdogs and it’s been the defense that has come up big. Rookie cornerback Patrick Surtain II intercepted two Justin Herbert passes and returned one of them 70 yards for a score. That earned him AFC Defensive Player of the Week honors and is one of the favorites for NFL Defensive Rookie of the Year. The Broncos rushed for 147 yards and two scores so Teddy Bridgewater wasn’t asked to do much. He completed 11-of-18 passes for 129 yards and a TD. He did leave for a while with a leg injury but it’s not expected to keep him out of this game. Left tackle Calvin Anderson (left knee) and left guard Dalton Risner (back) exited and didn’t return. After using backups as tackles in the win over the Chargers, regulars Garett Bolles (COVID-19 list) and Bobby Massie (ankle) could return this week.

Kansas City’s four-game winning streak has put them back in the mix for the conference’s top seed. Currently, the Baltimore Ravens are up by half-game over both the New England Patriots and Tennessee Titans with KC one back. The Chiefs would lose a tiebreaker to the Ravens, Bills and Titans due to head-to-head defeats. Patrick Mahomes has 11 interceptions on the season, but has been taking care of the ball better during the winning streak. Head coach Andy Reid is an amazing 19-3 in the regular season out of a bye week dating to his days in Philadelphia. Kansas City is 1-5 ATS in its past six as a home favorite and are 31st in the NFL with 22 giveaways. Rashad Fenton appears to be the leading injury concern for Kansas City while dealing with a strained knee. Kyle Long has been activated, but has yet to play.

Kansas City has been playing some good defense, but the offense is still a question mark. Denver plays well as an underdog and so does Bridgewater. I expect a low scoring affair here, so I’ll gladly take the points.