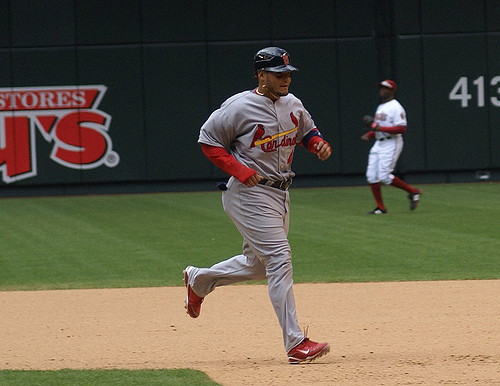 Two NL Central teams going in opposite directions will meet Tuesday night to begin a pivotal three-game series as the Milwaukee Brewers host the St. Louis Cardinals at Miller Park. The Brewers were in first place most of the first half, but have now lost 11 of their last 14 to relinquish their spot atop the Central to the Chicago Cubs in addition to setting a franchise record by going hitless in their last 31 at-bats with runners in scoring position. Milwaukee dropped two of three over the weekend to the Cubs and have scored just seven runs over the last four games. Travis Shaw is doing all he can, with three homers, five RBIs and five runs scored over his last eight games and is 3-for-6 with a homer and three RBIs in his career versus Tuesday starter Carlos Martinez. While the Brewers have dropped to 2.5 games behind Chicago, the Cardinals (52-53) have climbed to within 4.5 of the Cubs with wins in five of their last seven and are one victory shy of getting back to .500. Jose Martinez recorded a career-high three RBIs in Sunday’s 3-2 win over Arizona and has gone deep twice with six RBIs against Milwaukee this season. St. Louis just concluded a 7-2 homestand and will now hit the road for the next eight. The offense may get a boost on Tuesday as Stephen Piscotty, who has been sidelined with a groin injury, completed a short rehab stint with Single-A Peoria.

Martinez will look to rebound from a poor outing despite earning the victory last time out. He allowed five runs on Wednesday, but struck out eight in a 10-5 victory over Colorado. Martinez has been very good against Milwaukee, going 5-2 mark with a 1.75 ERA in 21 career appearances. Martinez is 1-1 versus the Brewers this season after allowing five runs in as many innings in a 7-5 loss on April 20th and surrendering one unearned run on four hits in 7.1 innings of a 2-1 victory two weeks later.

Jimmy Nelson is winless in his last three outings after a three-game winning streak prior. He received a tough no-decision after allowing two runs on four hits and striking out 10 in seven innings at Washington on Wednesday. Nelson owns an 0-8 mark with a 7.01 ERA in 11 career games against St. Louis, including a six-walk performance in a 6-4 loss on April 23rd.

This pick is a no-brainer or me. Just look at which direction the teams and tonight’s pitchers are going and that’s all you need to know. The Cardinals are hot – the Brewers are not. Martinez owns the Brewers – the Cardinals own Nelson. Need I say more?