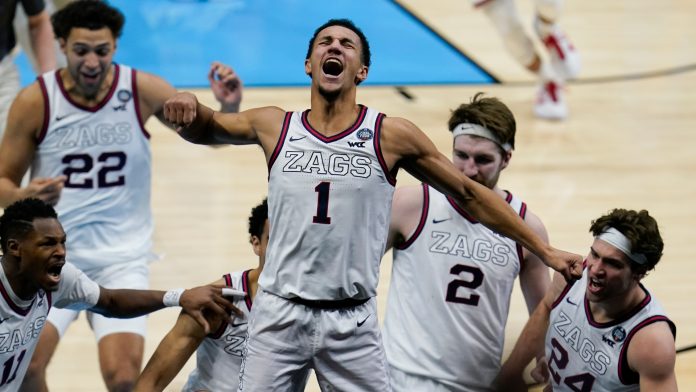 We finally have the matchup everyone has been predicting a looking for this Monday night from Indianapolis, Indiana. No. 1 seeds the Baylor Bears and the Gonzaga Bulldogs will battle for the 2021 NCAA National Championship four months after they were supposed to play. That game was cancelled shortly before tipoff due to a Gonzaga player testing positive for COVID-19. The Bulldogs are looking to become the first team to go through an entire season and tournament unbeaten since the Bobby Knight-led 1976 Indiana Hoosiers. Both teams are seeking their first ever title with the Bulldogs falling to North Carolina in 2017 and Baylor losing the 1948 title game to Kentucky. Baylor breezed to the final with convincing wins throughout the tournament including a 78-59 route of Houston on Saturday. The Zags were cruising through the Madness also until UCLA gave them all they could handle on Saturday. The Bruins took the Bulldogs to overtime, but Gonzaga prevailed on Jalen Suggs’ 35-foot miracle as time expired. That gave Gonzaga their 35th straight victory, but snapped a streak of 27 double-digits wins in a row.

The Bulldogs opened as 5-point favorites but the line quickly went down to 4.5 and has stayed their as of Sunday afternoon. The total is predictably high (159.5) with two of the best offenses in the country. Gonzaga has won all five previous meetings with Baylor, including an 83-71 win in the second round of the 2019 NCAA Tournament.

The Bears were only favored by five points in the National Semifinal against Houston, but many, like myself, thought that Baylor would run away with it. The Bears showed how ready they are for their battle with the Zags by coming up big on both ends of the floor. Baylor shot 52.7 percent from the field and 45.8 percent from long range against Houston. The Bears have the best 3-point shooting team in the country and are 19-of-39 over the last two games. Jared Butler led the way on Saturday with 17 points, while Davion Mitchell recorded a double-double with 12 points and 11 boards. The Bears’ defense also presents problems for Gonzaga with 17.1 turnovers forced per game. Baylor is 4-0 against the spread in its last four games overall.

Gonzaga will now have to calm down and gather themselves after that emotional finish and hard-fought back-and-forth game with UCLA. The Bulldogs shot an incredible 58.7 percent from the field against UCLA and has made over half their shots in all but one of its five games so far in the tournament. All five starters scored 11 points or more led by Drew Timme’s 25 points and Joel Ayayi’s 22. Suggs ended with 16 to go along with five rebounds and six assists, while Corey Kispert pitched in 15 points, five rebounds and five assists. Gonzaga is 4-1 against the spread in its last five games overall. Can the Bulldogs finish unblemished?

I don’t want to overreact to Saturday’s games, but the Baylor Bears looked very impressive and Gonzaga’s defense worries me a bit. Baylor is more than capable of getting in a shootout with the Bulldogs and I think that will keep it close. It wouldn’t shock me if Gonzaga won by four or less. I’ll take the points.