Olympics Andre De Grasse Aims for Gold at the Olympics 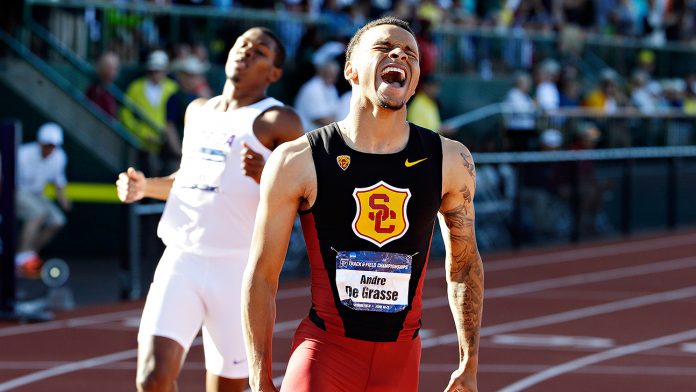 Andre De Grasse was somewhat unknown back during the last Olympics of 2016. At 21 years old, he entered the world stage, and it was all about just seeing what he could do. De Grasse is a little different to most athletes. Rather than being full of bravado and convincing the media that he will be next to take the gold, he is more reserved and much humbler. That doesn’t mean that he lacks confidence in what he can achieve and in fact he is fully confident that Tokyo 2020 will be his opportunity to shine.

With Tokyo 2020 being delayed by a full year, De Grasse goes into these games at the age of 26 with five more years of experience under his belt. In the midst of this was his success in the 2019 World Championships. Just two years later, will De Grasse be taking home an Olympic gold?

Where it all started

Of course, no athlete suddenly bursts onto the scene. Before any appearance at an Olympics, there are years of training and handwork that go on behind the scenes. However, when someone performs as well as De Grasse at their very first games, it can appear that they are an overnight success. De Grasse himself knows exactly what went into his performance but even he must have been pleasantly surprised.

After a showdown with Usain Bolt, the fastest man on the planet, De Grasse did himself and his country proud. He came back from Rio with three Olympic medals to his name. He took silver in the 200m, bronze in the 100m, and another bronze in the 4x100m relay. This medal haul saw him being catapulted to the status of one of the most successful Canadian Olympians of all time.

Does De Grasse have a strategy?

To the untrained eye, it may appear that De Grasse just puts his head down and runs all out. The truth is that De Grasse knows exactly what he is doing, and he knows exactly how to play every stage. The early rounds are almost a warm-up for De Grasse. He knows how much he needs to do to get through but looks at conserving his energy for the finals. The finals see a burst of energy and De Grasse smashing his personal bests. In a recent interview with Betway Insider Canadian sprinter Andre De Grasse said: “I feel like I have a lot more experience on my side. I know what to expect, whether that’s warming up, going to the call room or going through the rounds.”

Furthermore, this strategy has worked well for De Grasse so far. The finals of his events have seen him set new personal bests as well as bagging medals along the way. Each final, each personal best, takes him that bit closer to gold.

As you would expect, De Grasse has the support of a first-class coaching team, but there is more beyond this. Former Canadian greats Bailey and Surin are in regulate contact with De Grasse, giving him a boost.

In 1996 during the Atlanta games, Donovan Bailey became the first Canadian to ever win an individual sprint gold. Will the Tokyo games see De Grasse becoming the second?

Canada Homing in On a Spot at the Olympics

The Tokyo 2020 Olympics: All You Need to Know