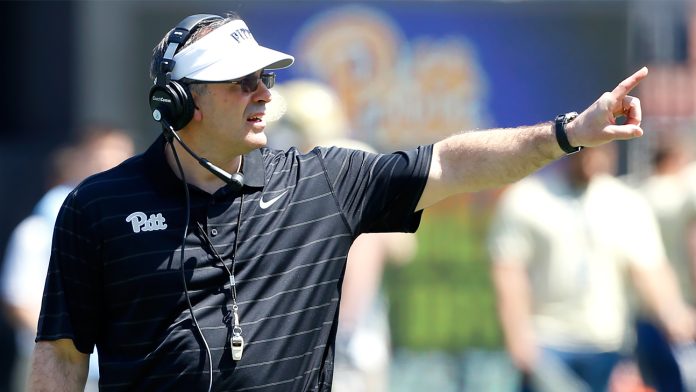 Most big College Football rivalries take place during the last few weeks of the season, but there are a few that get things started early. One of them takes place in Week 1 as the Pittsburgh Panthers host the West Virginia Mountaineers for the 105th time in the Backyard Brawl. However, these teams haven’t met since the 2011 season when West Virginia won at home 21-20. Game time is set for 7:00 ET on Thursday night on ESPN. The Panthers come in as 7-point favorites with a total of 51, as of Sunday evening.

The Mountaineers are led by head coach Neal Brown, who is just 17-18 in three seasons in Morgantown and is on the hot seat. Brown is coming off a 6-7 season and back-to-back bowl games, but the Mountaineers are just 11-15 in Big 12 play. The defense has just three projected starters returning, but do have a strong defensive line for coordinator Jordan Lesley. This matchup will mark a reunion for a pair of former USC quarterbacks with Kedon Slovis of Pitt taking on West Virginia’s JT Daniels.

Daniels will reunite with new offensive coordinator Graham Harrell, who inherits five returning starters up front. Slovis will have the task of replacing Kenny Pickett under center for Pitt, who finished 11-3 last season and are ranked 17th in the current AP Poll. Slovis is the best option to keep this offense going for new coordinator Frank Cignetti Jr., who inherited all five starting linemen from last season and a deep backfield. The road team is 4-2 ATS in the last six meetings but the home team has won three of the last four straight-up.

West Virginia returns six starters on offense, but did lose their top running back in Leddie Brown and top wideout Winston Wright. Still, the depth is there at the skill positions for Daniels to succeed. The Mountaineers had a chance at a winning record in 2021 but looked terrible in an 18-6 loss to Minnesota in the Guaranteed Rate Bowl. The offense averaged just 25.2 points a game last year, but that is sure to go up this season with Harrell opening up the offense. The Mountaineers will get a couple of easy home games coming up (Kansas and Towson) before a trip to Virginia Tech on a Thursday night.

Not only does head coach Pat Narduzzi have to replace Pickett, but playmaking wide receiver Jordan Addison as well. Addison had 100 catches for 1,593 yards and 17 touchdowns with Pickett. Slovis, who took over for an injured Daniels at USC in 2019, had 58 touchdowns and more than 7,500 passing yards at USC. The top three rushers return for 2022 – Israel Abanikanda (667 yards), Vincent Davis (621) and Rodney Hammond (513). Pitt went from averaging 29.0 points in 2020 to 41.4 last season. Defensively, the Panthers return seven starters, including Calijah Kancey up front. Pitt led the conference in rush defense, limiting teams to just 23.6 points a game. The Panthers will host Tennessee next weekend.

Pitt is definitely the better team here, but I’m very excited to see West Virginia’s new-look offense. It’s a road game for the Mountaineers, but they’ll have plenty of fan support in Pittsburgh. Daniels has the talent to run Harrell’s offense and can score enough to keep this one close.

We have plenty more College Football free picks for an exciting Week 1.