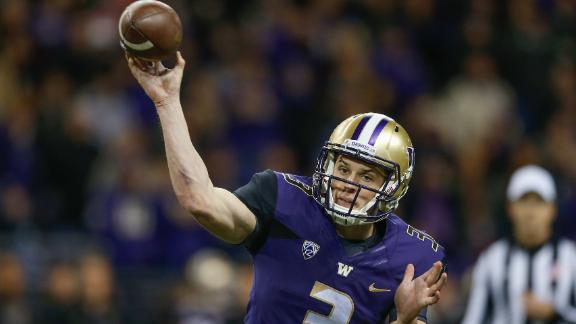 The best matchup in College Football this weekend takes place from Atlanta, Georgia, as a pair of top 10 teams clash in the Chick-fil-A Kickoff Game featuring the Washington Huskies and Auburn Tigers. This will be the third straight game at Mercedes-Benz Stadium for Auburn, who lost both the SEC Championship Game and Peach Bowl to end a 10-4 campaign last season. The Tigers are once again picked to finish second in the SEC West behind Alabama, and have to play at Tuscaloosa to end the regular season. The Huskies are a combined 22-5 over the past two seasons, and were part of the College Football Playoff two seasons ago. The Pac-12’s chances at another playoff appearance could hinge on this game Saturday, as a win over an SEC giant would put the Huskies in great position this season. Washington and Auburn are meeting for the first time and the Huskies are 2-11 against teams currently in the SEC and the Tigers are 8-3 versus current Pac-12 schools.

The Huskies bring back a lot of experience and are led by senior quarterback Jake Browning, who holds the school record of 78 touchdown passes and ranks second with 9,104 passing yards and has been intercepted just 24 times in 1,095 career attempts. Senior running back Myles Gaskin has eclipsed 1,300 rushing yards in each of his three seasons and should surpass the school career mark held by Napoleon Kaufman (4,106 from 1991-94) on Saturday, needing just 52 yards. With one of the best offensive lines in the country, Washington should be poised for a big season ahead on offense. Defensively, the Huskies feature a terrific secondary featuring sophomore cornerback Byron Murphy (three interceptions in 2017) and junior free safety Taylor Rupp (five career picks). Last year’s leading tackler Ben Burr-Kirven (84), leads a strong linebacker group that also includes Tevis Bartlett, who led Washington with 12 tackles for loss last season.

Auburn doesn’t have as many returning starters as Washington, but this Tiger squad is very deep and are still very talented. Jarrett Stidham was just the second quarterback in school history to top 3,000 passing yards in a season as he finished with 3,158 and 18 touchdowns against six interceptions. One big hole on offense that Auburn must fill is at running back, as junior Kam Martin (453 rushing yards) takes over the primary rushing duties from the departed Kerryon Johnson (1,391). The top five receivers from a year ago are back including senior Ryan Davis, who caught a school-record 84 passes for 815 yards and five scores in 2017. The defensive line returns nine of their top 10 on the depth chart including junior defensive tackle Derrick Brown (nine tackles for loss last season) and senior nose tackle Dontavius Russell. Senior linebacker Deshaun Davis is back as the team’s leading tackler from a year ago (82).

Normally, most SEC teams would destroy the Pac-12, because of their size up front, but this Washington team can stack them up with anyone in the country. Look for Browning to have a big day against the Auburn secondary, which is the weakest part of their team. The Tigers are just 5-14-1 ATS in their last 20 versus non-conference opponents and 1-5 ATS in their last six neutral-site games. The Huskies open the season with a statement win – a must for the Pac-12.