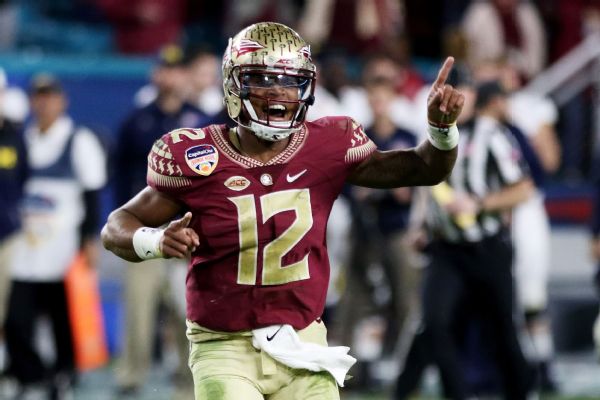 The ACC season gets right into it when the Virginia Tech Hokies visit the Florida State Seminoles in a battle of ranked teams to conclude Week 1 of the College Football schedule. The Seminoles’ hopes at a big upset to start the 2017 season ended when quarterback Deondre Francois went down with an injury against Alabama, and the season was lost from there. Gone is head coach Jimbo Fisher, replaced with Willie Taggert, who is coaching his third team in three years. Francois is back under center after beating out sophomore James Blackman for the job that seemed to be closer than expected. The Seminoles did finish strong after a lackluster start to win their last four including an easy Independence Bowl victory over Southern Mississippi (42-13). It was Florida State’s 41st consecutive winning season and 36 straight Bowl appearance, while Virginia Tech begins 2018 after going 19-8 in the first two years under coach Justin Fuente. The Hokies will be led by quarterback Josh Jackson, who threw for a freshman school record 2,991 yards along with 20 touchdowns last year. Virginia Tech has a lot of talent coming back on offense and should easily extend their consecutive bowl streak to 26 years. Florida State leads the all-time series 23-12-1, including 13-5 in Tallahassee, and beat the Hokies 30-20 in their last visit to Doak Campbell in 2008.

Jackson will be the key part of this Virginia Tech offense after compiling 3,315 yards of total offense and completing 59.6 percent of his passes last year. The weapons he has lined up with him include sophomore Deshawn McClease (530 yards, three TDs), who is the leading rusher returning and wideouts Eric Kumah and Sean Savoy, who combined for 67 catches and 778 yards in 2017. Long-time defensive coordinator Bud Foster will have to replace seven new starters on his unit, but senior defensive tackle Ricky Walker (4.5 sacks) and junior defensive back Reggie Floyd (72 tackles, three interceptions) lead the way. The Hokies will host William & Mary next week in their home opener.

Sophomore running back Cam Akers is back for Florida State after rushing for 1,024 yards – the most ever by a Florida State freshman – along with seven touchdowns in 2017 and the Seminoles are experienced along the offensive line. Francois, who threw for 210 yards against Alabama in last year’s opener before going down with the injury, will have senior receiver Nyqwan Murray (40 catches, 604 yards) and junior Keith Gavin (27, 278) back at his disposal. The defense will be tested early, as Florida State replaces seven starters including the top four tacklers from 2017.

Experts seem to underrate Virginia Tech every season because of their offense, but with Jackson leading the way, the Hokies can keep up with most teams including Florida State. The Hokies defense has to replace a lot, but the key players are back and Bud Foster is one of the best coordinators out there. I’ll take the points here.