Casino The Popularity of Social Games: From Habbo to Meta 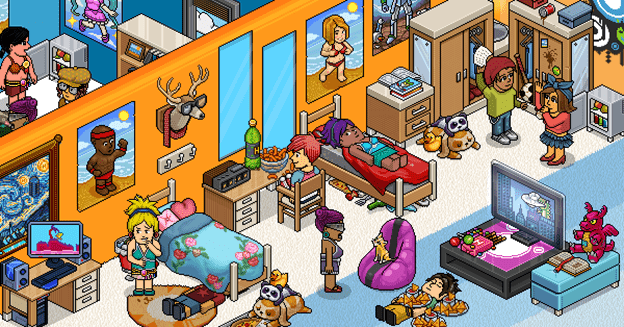 In light of the recent rebranding of Zuckerberg’s universe and the emergence of Meta, it is clear that social games are more relevant than ever. The pandemic has given a new life to all online communities/social games, from Habbo to Fortnite. Starved for communication, people have turned to online spaces. Going forward, social games will keep growing and developing into entire multiverses.

A “social game” is a bit of a vague concept. Every gamified online community can be considered a social game, but technically, so can Sims. The only requirement is for the game to be heavy on a social aspect. This implies that the main appeal of a social game is that it connects users and allows them to communicate and build relationships in a designated online space.

The pioneers of social gaming, such as Habbo Hotel (launched back in 2000), enjoy unparalleled loyalty from players. It is pretty common for social gamers to play the same game for over a decade and basically transfer their lives into the metaverse. Metaverse is defined as “a persistent bridge between the physical and digital worlds with unprecedented scale, interactivity, and interoperability.” Simply put, it is an online universe that mimics the real world in terms of what members/players can do. Social games do just that.

Why social games are popular

Social games to check out

Habbo (formerly Habbo Hotel) is the pioneer of social games. It is an online community/game where players live as avatars in a universe that resembles arcade games. Habbo looks very retro but has a cult-like following and is definitely worth a try.

As the name suggests, Second Life is another classic social game. Players create avatars and build an entire parallel life in the game’s universe. Second Life is not nearly as OG or popular as Habbo, but the visuals are much better and realistic-looking.

SmallWorlds is a lovely MMORPG that is conceptually similar to both Habbo and Second Life. SmallWorlds’ avatars are more cartoonish than Second Life’s, and it has fewer active users. But it has great in-game features, such as access to YouTube videos.

Fortnite is not exactly a social game in the traditional understanding of the concept. It’s primarily a shooter-survival game. But Fortnite is heavy on user communication and allows players to build both their identities and entire locations as they please.

Finally, Zuckerberg’s recent decision to turn Facebook and affiliated platforms into Meta requires no introduction. It has little in common with Habbo-like OG social games, but it is definitely an attempt to create a true metaverse. And it is entirely socialization-based. So Meta surely belongs on the list of social games.

Types of Online Casino Bonuses in the Philippines