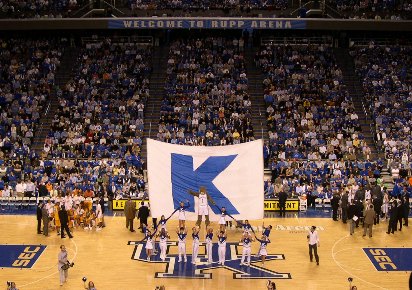 The top-ranked Tennessee Volunteers are on a historic run this season and look to extend their school-record winning streak to 20 games when they visit Rupp Arena to take on the Kentucky Wildcats on Saturday night. The Volunteers are running through the SEC much like Gonzaga is demolishing the WCC, but Tennessee’s feat is much more impressive because of the level of competition. That level ramps up big time over the next few weeks as the Vols will play third-place Kentucky twice, fourth-place Ole Miss, and second-place LSU, with Vanderbilt mixed in. Kentucky has been on a roll themselves, but saw their 10-game winning streak snapped with a heart-breaking loss at home to LSU Tuesday when the Tigers got a controversial tip-in at the buzzer to win 73-71. The loss was Kentucky’s first at Rupp Arena this season (14 games) and first in its last 17 home games. The Volunteers upended the Wildcats in Rupp Arena last season 61-59 as part of their rare season sweep, but Kentucky owns a huge 90-17 edge all-time in Lexington.

Tennessee is defeating its opponents by an average of 18.1 points during its school-record run thanks to owning the nation’s seventh-highest scoring offense (85.4) and the conference’s third-best scoring defense (67.5). The Volunteers are coming off their sixth consecutive double-digit victory with Wednesday’s 85-73 win over South Carolina. Reigning SEC Player of the Year and 2019 National Player of the Year candidate Grant Williams (19.4 points, 7.4 rebounds, 3.5 assists, 1.9 blocks) scored just eight points against the Gamecocks, but brought down nine boards, dished out seven assists, blocked three shots. Admiral Schofield (16.7 points, 6.4 rebounds) recorded 21 points and 10 rebounds versus South Carolina for his fourth double-double of the season and his third in the last eight games.

Kentucky can really make the SEC interesting with a win over Tennessee tonight as they currently sit two games back and will get two more cracks at them. Freshman guard Keldon Johnson (14.0 points) had one of his better games against SEC-foes on Tuesday with 16 points versus LSU, but has yet to eclipse 20 points in conference play after contributing 21 or more points four times in non-conference action. Sophomore forward PJ Washington leads the team in both scoring (14.4) and rebounding (8.1) and is currently the young team’s primary offensive option. Reid Travis has not adapted to SEC play quite yet, scoring fewer than 10 points in eight of 11 league games after finishing third in the Pac-12 in scoring (19.5 points) last season at Stanford.

I know Tennessee is building up wins against the bottom part of the conference, but they are still one of the best in the country and proved last season they aren’t intimidated by Rupp Arena. They are a little more seasoned than this young Wildcats squad and I’ll gladly take points with the No. 1 in the country any day. Tennessee has a bit of a chip on their shoulders as nobody has really been talking about them like Duke.