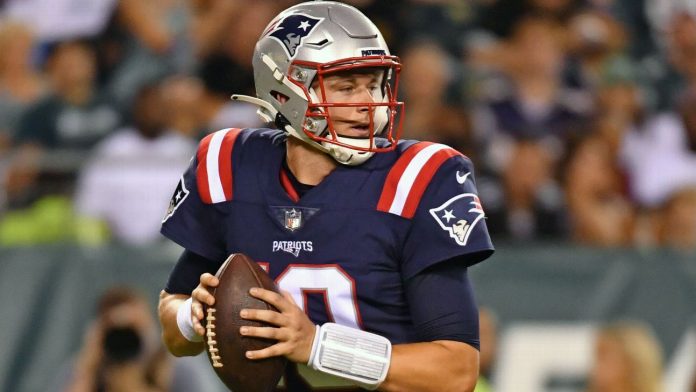 Don’t look now Buffalo Bills fans, but the hated New England Patriots are alive and kicking once again. The lead in the AFC East is all of the sudden down to one game thanks to a four-game winning streak from Mac Jones and the Pats. New England will look to make it five in a row when they visit the Atlanta Falcons on short-rest this Thursday night at Mercedes-Benz Stadium. Not only has New England won four straight, but they’re steamrolling their opponents in the process. The Pats are coming off a 45-7 home route of the Cleveland Browns and have outscored their foes 150-50 during the streak and easily covering the spread in each. They are 7-point favorites in their Super Bowl LI rematch in which the Falcons famously blew a 28-3 third quarter lead.

Things have not gone well for Atlanta since then and they are caught in the middle of a rebuilding/competing campaign in 2021. The Falcons had won three of four to get back into the playoff mix, but were humiliated 43-3 at the Dallas Cowboys last week. Atlanta was down 36-3 before you could blink, and could never get anything going. A key to Thursday’s contest is the health of Mr. Do-Everything Cordarrelle Patterson. He was limited in Tuesday’s practice due to an ankle injury, and his status might not be known until close to kickoff. Patterson leads the Falcons in rushing, is second in both receptions and receiving yardage and has seven touchdowns (five receiving, two rushing). Atlanta is only one game behind the final playoff spot in the wide-open NFC.

Jones was the fifth quarterback taken in April’s NFL Draft and he’s turning out to easily be the best of the group right now. In Sunday’s 45-7 blowout of Cleveland, Jones had a career-high rating of 142.1 by completing 19-of-23 for 198 yards and three touchdowns. On the season, Jones is completing 69 percent of his passes for 2,333 yards, 13 touchdowns and seven interceptions. With top running back Damien Harris out with a concussion, rookie Rhamondre Stevenson got his first start and rushed for 100 yards and two scores on 20 carries against a solid Browns defense. For the first time in Bill Belichick’s career, the Patriots had three touchdown drives of at least 90 yards. It was also Belichick’s 250th regular-season win with the Patriots to tie Tom Landry (250 with Cowboys) and become the fourth NFL coach with at least 250 wins with one team. New England held Cleveland to 217 total yards and recorded five sacks last week.

Atlanta quarterback Matt Ryan played one of the worst games of his career, completing just 9-of-21 passes for 117 yards and two interceptions. He was pulled late with the game completely out of hand. The 117 yards were the fewest of his career when he attempted at least 10 passes and his 21.4 passer rating was also a career-worst. When Atlanta is not committing turnovers, they are actually a pretty good team as evident of their play before last week. Tight end Kyle Pitts continues to shine, hauling in 40 passes this season for 606 yards and a TD. Last week’s 33-point halftime deficit was the franchise’s largest since trailing the Johnny Unitas-led Baltimore Colts 35-0 on Nov. 12, 1967. Three Falcons sat out Tuesday’s practice: linebacker Daren Bates (groin), tight end Hayden Hurst (ankle) and cornerback Kendall Sheffield (hamstring).

If you take last week’s results for each team, you can see why this line is this high. But this is an unpredictable league and never goes the way you think. Just take a look at last Thursday’s game. Nobody, including me, gave Miami a chance in hell against the Ravens, but the Dolphins proved everyone wrong. Atlanta is not a terrible team and Matt Ryan will not have a dud like he did last week. I say the Falcons keep it close.