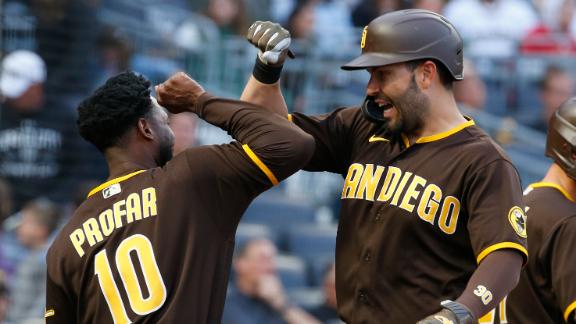 This game and article was for Tuesday’s game, but the game was PPD. The same pitchers are scheduled to go in Game 1 of a double-header on Wednesday. As long as the same pitchers go, this play will stand as an official pick.

In order to win the extremely difficult National League West Division, you have to beat up on the teams you’re supposed to. That’s exactly what the San Diego Padres have done over the last week and are right in the thick of an early competitive race out West with the San Francisco Giants, Los Angeles Dodgers and even the Colorado Rockies. The Padres continue their eight-game road trip when they visit the Cleveland Guardians for the first of two on Tuesday night. San Diego is already 5-1 on this trip against the lowly Pittsburgh Pirates and Cincinnati Reds, scoring at least five runs in all six games. They bring the top two hitters in the league to Cleveland in first baseman Eric Hosmer (.382) and third baseman Manny Machado (.375). This will also be the first start since late 2020 for former Cleveland pitcher Mike Clevinger, who missed all of 2021 after having Tommy John surgery.

The Guardians were near the bottom of the AL Central after losing seven straight games, but bounced back with a nice three-game sweep at the Oakland A’s over the weekend. The 7-3 win in the finale on Sunday gave Cleveland their first sweep in Oakland in almost 22 years. The question coming into this season was not the pitching. It was whether or not the team could score enough runs. So far, Owen Miller (.377), Andres Gimenez (.346), Jose Ramirez (.341), Steven Kwan (.340) and Josh Naylor (.313) are all hitting over .300. As a team, the Guardians are fourth in the Majors with a .251 batting average and 10th with 4.59 runs per game. This will be the first meeting between the teams since July of 2017.

Clevinger might have a little nerves not only because he hasn’t pitched in the big leagues in a while, but he’ll go up against his former team. The righty helped pitch the Padres into the 2020 National League Division Series against the Los Angeles Dodgers before his elbow injury. Clevinger made three rehab starts over two minor league levels and struck out 15 in 8 2/3 innings with a 2.08 ERA.

Clevinger will be opposed by good friend Zach Plesac on Tuesday. The fellow right will be making his fifth start of the season and will be looking to bounce back from a poor outing against the Angels. Plesac was hit for seven runs – six earned – over 3.2 innings in a 9-5 loss to L.A. He had allowed two runs or fewer in his first three starts.

The Padres are on a roll, but they have been beating up on bad pitching. The Guardians don’t have bad pitching. Plesac has been good outside of his last start and should be able to slow down the San Diego bats. Clevinger will have some nerves in this one and the Guardians are patient and don’t strike out a ton.

This game and article was for Tuesday’s game, but the game was PPD. The same pitchers are scheduled to go in Game 1 of a double-header on Wednesday. As long as the same pitchers go, this play will stand as an official pick.