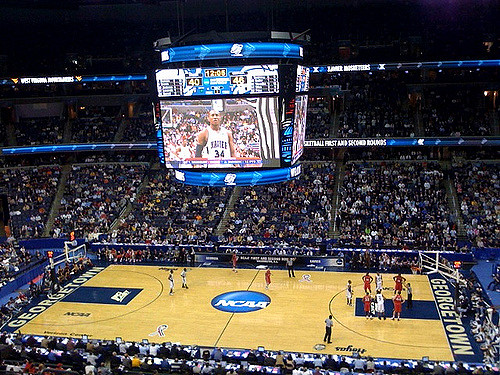 The West Regional in Boise, Idaho has probably been the most exciting in this year’s NCAA Tournament, as three of the four games were tightly contested with exception being Buffalo’s huge blowout of Arizona. Two of the team’s from that region – Gonzaga and Ohio State – will meet for the second time this season for the right to advance to the Sweet 16 next week. Gonzaga looked as if it would cruise into the second round against UNC Greensboro on Thursday, building a 12-point second-half lead, but trailed 64-62 with 1:48 remaining until guard Josh Perkins knotted things up with a long jumper. Then, redshirt freshman Zach Norvell Jr. drilled a go-ahead 3-pointer with 20.8 seconds left to secure Gonzaga’s 10th straight first-round NCAA tourney win and its 15th straight victory overall. Following the Bulldog’s escape at Taco Bell Arena, the fifth-seeded Buckeyes also saw a double-digit lead (13 points) slip away in the second half against a game South Dakota State team. The Jackrabbits had pulled even at 70 with 1:53 remaining, but Ohio State senior guard Kam Williams scored the game’s next seven points, starting with a go-ahead 3-pointer, to help secure the Buckeyes’ first March Madness victory since 2015. This will be the third meeting all-time between the programs, with the second coming earlier this season when Gonzaga dominated the Buckeyes in an 86-59 win at the PK80 Invitational in Portland during Thanksgiving break. Williams (21) and Perkins (20) led their respective squads as the Bulldogs shot 58.5%, including making 12-of-25 3-pointers, while the Buckeyes shot a season-low 34.5%. The only other meeting came in the second round of the 2012 NCAA Tournament in Pittsburgh, where second-seeded Ohio State beat seventh-seeded Gonzaga 73-67.

The Buckeyes are going after their first Sweet 16 appearance since 2013 and are guided by first-year coach Chris Holtmann. Williams, fellow guard C.J. Jackson and forward Keita Bates-Diop, the Big Ten Player of the Year, combined for 66 of the team’s 81 points against South Dakota State. They also combined for 26 rebounds, eight assists and four steals as Ohio State grabbed 15 offensive rebounds, leading to 19 second-chance points against the smaller Jackrabbits lineup. Bates-Diop is averaging 19.5 points and 8.9 rebounds this season after his 24-point, 12-rebound effort on Thursday, and the Buckeyes are 12-1 when he records a double-double.

The Bulldogs also received a double-double Thursday as forward Johnathan Williams recorded his fourth straight with 19 points and 13 rebounds on 8-of-12 shooting. Perkins (16 points) and Norvell (15) also scored in double figures against UNC Greensboro, helping Gonzaga overcome uncharacteristically poor shooting from 3-point range (5-of-23) and from the charity stripe (13-of-25). The Bulldogs’ 68 points matched their lowest total in a game this season, as they rank 12th nationally with 84.0 points per contest with six players averaging at least 9.4, led by Williams (13.7), forward Killian Tillie (13.1) and Perkins (12.5).

I really thought the Buckeyes would lose to South Dakota State – and they almost did – because I think they are a bit overrated. I watched the first meeting this season between these teams and it wasn’t even close. This game will be more competitive, but the Zags will come out on top thanks to a wake-up call from UNC Greensboro.