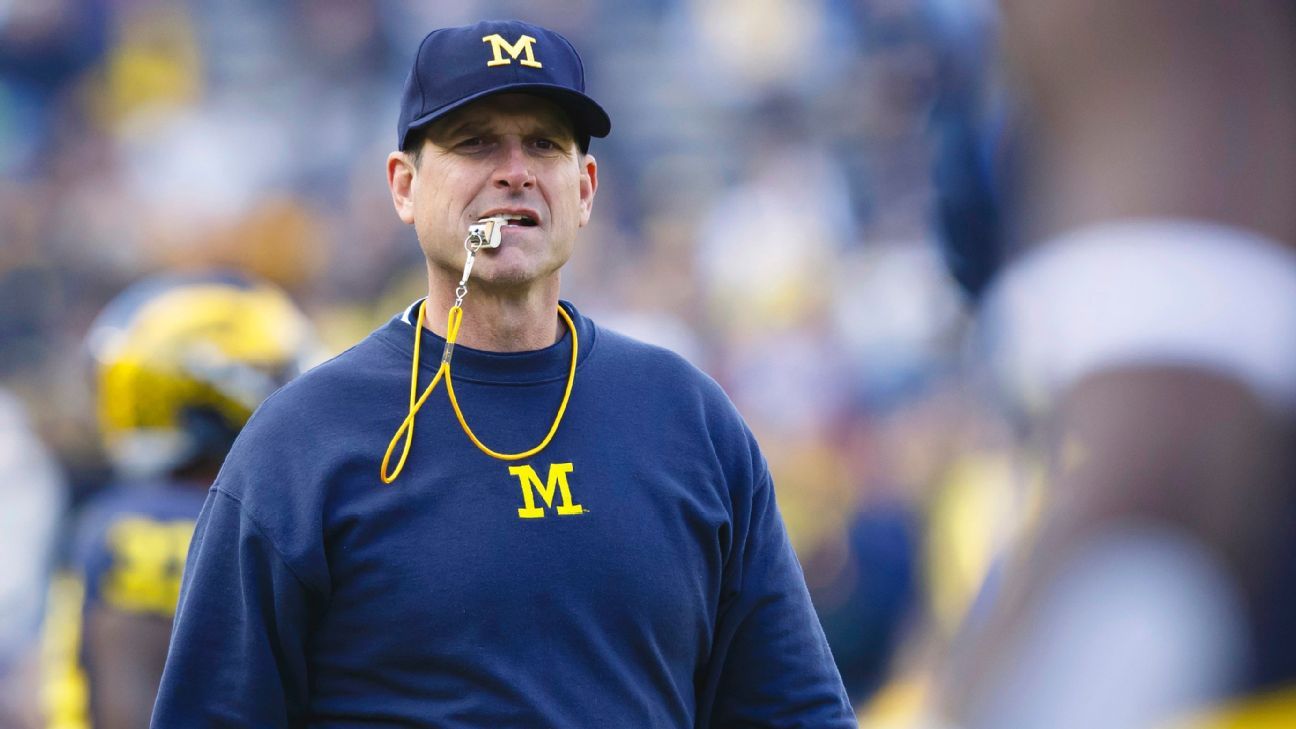 For the second consecutive week, the Michigan Wolverines will be featured on the ABC Saturday night game of the week when they host the seventh-ranked Notre Dame Fighting Irish as part of the Week 9 schedule. Michigan coach Jim Harbaugh has been given numerous chances to bring this program back to dominance by playing one of the tougher schedules every year. The Wolverines get another chance Saturday to improve on their porous 1-10 record against top 10 teams under Harbaugh after last week’s 28-21 loss at then-No. 7 Penn State. It appeared Michigan was going to get blown-out in State College, but the team rallied from 21 down and ultimately fell short when Ronnie Bell dropped a pass in the end zone on 4th-and-goal with 2:01 remaining, which would have potentially sent the game to overtime. Notre Dame’s playoff hopes remain alive despite a 23-17 loss at Georgia earlier this season and they’ve reeled-off three straight wins since. The latest came two weeks ago at home to USC – a tough 30-27 victory – and they will be heavily favored in the rest of their games after Saturday. The Irish have won the last two meetings with Michigan and the home team has won and covered five straight and eight of the past nine. If you run your own sportsbook, you can set the line for this game yourself by using one of many pay per head services. As of Thursday evening, most shops have this game as Notre Dame -1 after the Wolverines opened as 2-point favorites.

Notre Dame has allowed two of their last three opponents to reach 20 points or more, but the unit still ranks 15th in the country at 16.8 points per game allowed and have held their last 20 foes to 30 points or fewer. The offense averages 39.2 points a game and some of that can be attributed to their perfect red-zone scoring percentage – 22-for-22. Tony Jones Jr. eclipsed 100 yards rushing for the third consecutive game after recording 176 in the win against USC two weeks ago. Quarterback Ian Book was a modest 17-of-32 for 165 yards and a touchdown along with a rushing score as the Fighting Irish rushed for a season-high 311 yards against the Trojans. Notre Dame will host Virginia Tech next Saturday.

The Michigan defense should get a lift this week with the return of linebacker Josh Ross after missing the last four games with a leg injury. That will only help an already solid defense that ranks eighth against the pass (163.6) and 14th overall (285). They kept Michigan in the game last week by holding the Nittany Lions to seven second-half points and bring some momentum into this contest with the Irish. Quarterback Shea Patterson had his best game of the season, completing 24-of-41 passes for 276 yards and rushed for a touchdown, as the Wolverines finished with 417 total yards against Penn State. Zach Charbonnet ran for two touchdowns to move within two scores of matching the freshman record set by Mike Hart and Tyrone Wheatley (nine). Michigan will be at Maryland next week.

Nobody is giving Michigan a chance in this one – and I don’t blame them. But, the Wolverines didn’t play poorly last week and they’re much better at home, winning 12 straight at Michigan Stadium. This rivalry has been dominated by the home team since 2007 and I say the Wolverines get their act together and come out with a victory here.