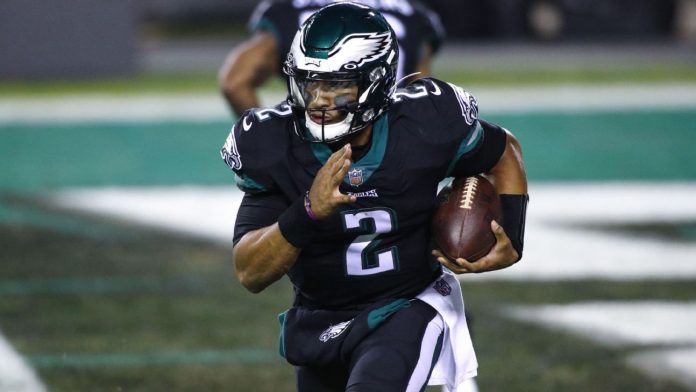 The NFC East boasts the longest streak in NFL history to not have a repeat defending division champion. It’s been since the 2004 season when the Philadelphia Eagles did it. Last year, the Dallas Cowboys ruled the East and come in as the +135 favorites, followed by Philadelphia at +155. The Washington Commanders and New York Giants are a distant third and fourth respectively, so it appears to be a two-horse race in 2022.

It’s been a long time since the Dallas Cowboys have had an extended postseason run and fans are getting frustrated. Dak Prescott will look to lead the Cowboys to the promised land with a little bit different offense in 2022. The team traded veteran wide receiver Amari Cooper to the Cleveland Browns, while starting offensive linemen La’el Collins and Connor Williams have moved on to different teams. First round pick Tyler Smith will fill a gap in the line, while Zack Martin and Tyron Smith are among the top offensive linemen in the league. Wide receiver James Washington from Pittsburgh will play alongside star receiver CeeDee Lamb. On defense, Micah Parsons and 2021 interception leader Trevon Diggs, give the defense playmakers.

The Eagles are in great position to battle the Cowboys for the division crown behind quarterback Jalen Hurts. He already has Heisman Trophy winner DeVonta Smith, who was selected in the first round a season ago. Now, a first-round pick was sent to the Tennessee Titans for star receiver A.J. Brown. Dallas Goedert is one of the best tight ends in the league and if running back Mile Sanders can stay healthy, the Eagles have a potent offense. On defense, Philly added veterans Haason Reddick, Kyzir White, cornerbacks James Bradberry and Jimmy Moreland, as well as safety Jaquiski Tartt. They selected Georgia defensive tackle Jordan Davis in the draft and his teammate Nakobe Dean.

The Washington Commanders have a new name and a new quarterback. Carson Wentz was acquired to help stabilize an inconsistent passing game, so the offense is expected to be better. Washington has great running back depth in Antonio Gibson, J.D. McKissic and former Alabama back Brian Robinson. Terry McLaurin will be Wentz’s top target, but the team also took a first round chance on Penn State speedster Jahan Dotson to give Wentz more options. Former Pro Bowlers Andrew Norwell and Trai Turner were signed to help strengthen the offensive line. The defensive line is the strength of the team with Chase Young, Jonathan Allen, Montez Sweat, Daron Payne and Phidarian Mathis.

The changes in New York begin at the top with former Buffalo Bills offensive coordinator Brian Daboll the new head coach. The Giants had two high draft picks and went to the interior for pass rusher Kayvon Thibodeaux and offensive tackle Evan Neal. New York also added veteran offensive linemen Jon Feliciano, Max Garcia, Mark Glowinski and Jamil Douglas in free agency. This could be Danie Jones’ last chance to prove he can lead this team to the playoffs or next year’s first round pick could be a quarterback. Fans are still waiting for running back Saquon Barkley to stay healthy and break out. Tight end Even Engram is gone and receivers Kenny Golladay, Kadarius Toney, Sterling Shepard and Darius Slayton combined to miss 24 games last season.

Jay’s Season Win Total Best Bet: With Wentz under center, a solid running game and great defensive line, it’s hard to believe the Commanders can’t finish above .500. There are a lot of winnable games on the schedule with the Giants (twice), Lions, Jaguars, Bears and Falcons. It’s a good bet that Washington will get to 9 wins.
Commanders OVER 8 -105

Jay’s Pick to Win Division: The schedule sets up real nice for the Eagles to have a good start and gain confidence heading into the Dallas game on Oct. 16. After that, it’s Pittsburgh and Houston. The Cowboys have the Bucs, Bengals and Rams before the Philly game. I like Hurts leading this offense and he has some nice weapons to throw to. The defense is solid enough to help Philly win back the division.
Eagles +150

To see more odds and props for the NFC East, click here.