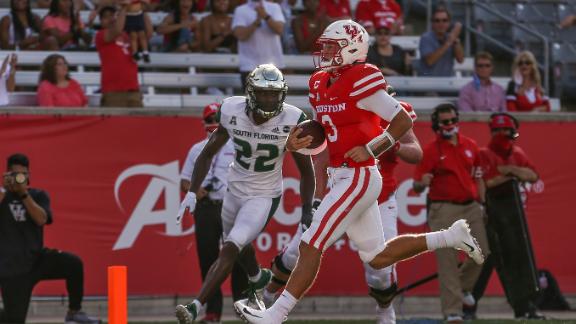 The Hawaii Rainbow Warriors are used to playing on Christmas Eve – just not on the mainland. The Rainbow Warriors will travel to Frisco, Texas for this year’s edition of the New Mexico Bowl against the Houston Cougars. Yes, this Bowl will not be played in its normal location of Albuquerque because of that state’s health guidelines regarding intercollegiate athletics and travel amid the COVID-19 pandemic. The game was set the day after both teams played their final regular-season game. Hawaii evened their record at 4-4 with a 38-21 triumph over UNLV, while Houston is coming off a 30-27 loss to Memphis to drop below .500. Hawaii left early on Monday and will make just their third-ever trip to a bowl in the 48 contiguous states and first since the 2008 Sugar Bowl in New Orleans. They are led by first-year head coach Todd Graham, who guided Hawaii to its fourth bowl bid in the past five seasons. Houston is headed to its seventh bowl in the past eight seasons under head coach Dana Holgorsen, but it hasn’t been easy. The Cougars had eight games postponed, canceled or rescheduled due to COVID-19 and have played only once since Nov. 14.

The teams are set to meet for the second time in a bowl game after Hawaii edged Houston 54-48 in triple overtime at the 2003 Hawaii Bowl. The Rainbow Warriors are favored by 11 points with a game total set at 59.5. Houston is 19-7 all time against current Mountain West Conference teams, including losses in three straight bowl games to the. Houston is just 1-3 ATS in their last four games, while Hawaii has played to the under is six of their eight games this season. Graham is 5-5 SU/ATS in bowl games, but Holgorsen is just 2-5 SU and 1-6 ATS.

The Rainbow Warriors used defense and a solid running game to dispatch of the Runnin’ Rebels on Dec. 13. Hawaii forced three turnovers and rushed for 252 yards and five touchdowns on 46 carries. Quarterback Chevan Cordeiro went 20-of-33 for 252 passing yards, but had zero touchdowns while also getting intercepted once. However, he led the team with 88 rushing yards and two touchdowns on just 12 carries. Cordeiro has thrown for 1,947 yards with 11 touchdowns and six interceptions on the season, while leading his team in rushing with 450 yards and seven scores. The Rainbow Warriors rank a solid 20th in the country at stopping the pass (190.6), but are a horrendous 116th against the run, allowing 231.5 yards per contest. The under is 3-0 in Hawaii’s last three games overall.

In Houston’s loss to Memphis, quarterback Clayton Tune completed 30-of-49 for 270 passing yards and two touchdowns against an interception. Houston lost that game despite outgaining the Tigers 409-310, and went 5-of-5 on fourth-down conversion attempts. The Cougars are ninth in the nation with an 80 percent conversion rate on fourth downs. Tune has 1,832 passing yards with 13 touchdowns and seven interceptions on the season. He also has 269 rushing yards and five scores on the ground. The Cougars have a solid pass rush that’s eight in the nation with 9.28 sack percentage. Hawaii’s offensive line has allowed 26 sacks on the season – second-most in the Mountain West Conference. Houston struggles with discipline, ranking 113th with an average of 8.0 penalties per contest.

Houston is the better team, but this seems like a lot of points. Holgorsen does not have a good bowl track record and Hawaii is probably happy to be playing in a bowl game other than their own for a change. I’ll take the points with a small play.