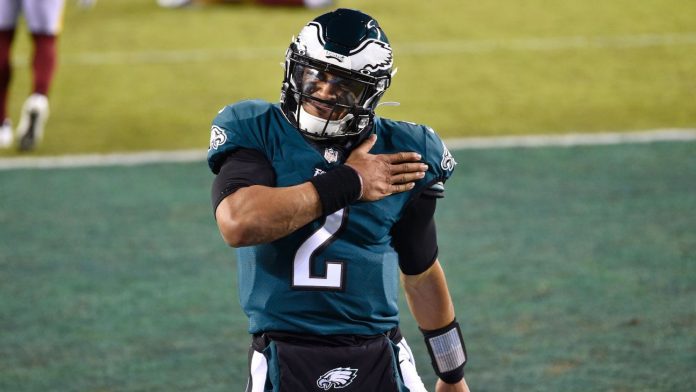 Week 3 of the NFL season concludes with a bitter NFL East rivalry in Arlington, Texas on Monday night. The Philadelphia Eagles visit the Dallas Cowboys in a battle of 1-1 teams. This will be the second of six nationally televised standalone games for the Cowboys including the Thanksgiving Day contest with the Las Vegas Raiders. Dallas opened the 2021 NFL season with a close 31-29 loss at the Tampa Bay Buccaneers, but followed that up with a 20-17 win at the Los Angeles Chargers as 3.5-point underdogs. The Cowboys have been very opportunistic with a league-high six takeaways and a league-leading plus-four turnover differential.

Philadelphia has yet to turn the ball over after two weeks, but they have also failed to create a single turnover. The Eagles looked sharp in their season-opening 32-6 win at the Atlanta Falcons and hung around with Super Bowl contending San Francisco in a 17-11 setback at home last week. Last season, these teams split with each winning at home. The Cowboys were without star quarterback Dak Prescott for both games including the 37-17 win in Week 16. Current Eagles starting QB Jalen Hurts did play in that one and threw for 342 yards and a TD with two picks while rushing for 69 yards. The home team has won and covered each of the last five meetings. The Cowboys are 3.5-point favorites in this one with a total of 52.

Hurts was not sharp in the Week 2 loss to the 49ers, going just 12-for-23 for 190 yards but did rush for 82 yards and a score. The former Oklahoma star has passed for 454 yards and three touchdowns with zero interceptions so far this season. He leads the team with 144 rushing yards that has helped the Eagles secure the second-best rushing game in the league at 162.0 yards per game. Rookie wideout DeVonta Smith, the 2020 Heisman Trophy winner, was limited to just two catches for 16 yards versus the Niners. The injury news was not great from that game as Pro Bowl defensive end Brandon Graham was lost for the season and Pro Bowl guard Brandon Brooks likely will land on injured reserve. Tight end Zach Ertz landed on the COVID list Monday as well. Graham has forced 19 fumbles – tied for third-most in franchise history – and has recovered seven of them. The Eagles are 1-6 ATS in their past seven road games.

The Cowboys were fortunate to come away with the victory last week at SoFi Stadium. The Chargers had a couple of touchdowns called back due to penalty and Dallas coach Mike McCarthy had some very questionable clock management on the final drive. Still, Greg Zuerlein managed to nail a 56-yard game-winning field goal as time expired. Dallas played without three defensive starters including edge rusher DeMarcus Lawrence, who will miss at least six weeks. Offensive tackles La’El Collins and Ty Nsekhe and receiver Michael Gallup also missed it and neither will play this week. No. 1 wideout Amari Cooper might not play either after suffering a rib injury against the Chargers. Cooper has 16 catches for 163 yards and two scores so far. Prescott was 22-of-27 passes for 237 passing yards last week, but was not able to pass for a touchdown and got intercepted once. Dallas is averaging 435.0 yards per game and converting an NFL-best 55.6 percent of its third-down opportunities.

Dallas’ offense is going to be too much for this Eagles defense to contend with. Prescott has picked up right were he left off before getting hurt in 2020 and looks even better now. Hurts is still playing like a rookie and will have trouble against this slowly improving Dallas defense. Remember, the home team has won and covered each of the last five meetings.