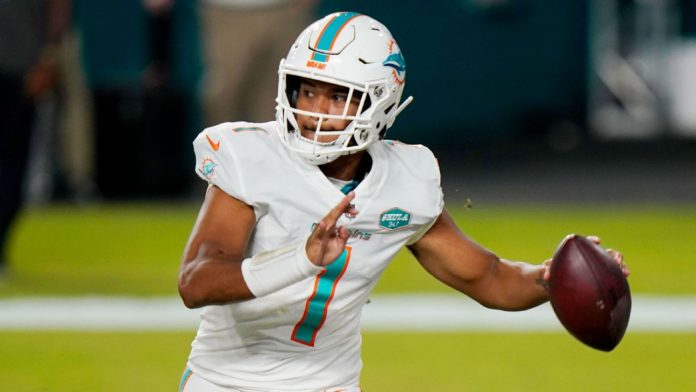 There are major playoff implications on the line Saturday night in the desert as the Miami Dolphins visit the Las Vegas Raiders in Week 16 NFL action. Neither team has reached the postseason since 2016 and both have a shot this year, though Miami’s chances are much better. The Dolphins currently own the seventh and final spot in the AFC. They are tied with the Baltimore Ravens at 9-5 heading into this weekend’s action but the Ravens, who host the New York Giants (5-9) before finishing up at Cincinnati (3-10-1), have a big edge in the remaining schedule. After playing Las Vegas Saturday, Miami must travel to Buffalo (11-3), who are battling for a No. 2 seed. Miami coach Brian Flores has done a great job this season and will get some NFL Coach of the Year votes. This is team is loaded with young talent and stacked with 2021 high draft picks thanks to a previous trade with Houston. Miami is coming off a very satisfying win, eliminating the New England Patriots from playoff contention with a 22-12 victory. The Raiders have made the postseason just once since 2003 and are still mathematically alive, although they need a lot of help. Backup quarterback Marcus Mariota took over in relief for Derek Carr, who suffered a groin injury late in the first quarter in Thursday night’s 30-27 overtime loss to the Los Angeles Chargers. However, Carr alternated snaps with Mariota in practice this week and is listed as the probable starter for Saturday night. Carr pulled up and grabbed the inside of his left leg while trying to scramble around right end, hopping out of the bounds and heading straight to the locker room. The loss to the Chargers was the fourth in the last five games for Las Vegas and the team is just 5-13 (.278) in December-January games since the start of 2017. Only the Carolina Panthers (4-12) have a worse mark during that span.

Miami comes into this one as a field goal favorite with a total of 48. The Dolphins have won eight of the past 10 in the series and covered in seven of those. That includes last year’s meeting when Miami was a 28-20 home winner over the Oakland Raiders. Ryan Tannehill was the Dolphins’ QB that day and threw three TD passes but is now with Tennessee. Carr threw for 345 yards and a score but was picked off twice.

Miami ran all over the Patriots last Sunday, rushing for a season-high 250 yards while averaging 6.0 yards per carry. Rookie running back Salvon Ahmed, who had missed three straight games with a shoulder injury, had a career-best 122 yards on the ground. He was the first Dolphins player to rush for 100-plus yards in two years. Miami had gone 31 straight games without a 100-yard rusher. They were forced to run more versus New England because rookie QB Tua Tagovailoa was missing his top two wideouts, DeVante Parker and Jakeem Grant, and No. 1 tight end Mike Gesicki to injury. Tagovailoa went 20-of-26 passing for 145 yards and an interception and also rushed for two touchdowns to improve to 5-2 as a starter. He is now completing 63.5 percent of his passes in his starts to go with nine touchdown passes and two interceptions. The Patriots failed to score a touchdown, thus further improving the Dolphins’ average of 2.2 touchdowns allowed per game, currently the third-fewest in the NFL. The Dolphins also sacked Patriots quarterback Cam Newton three times. Miami is also No. 1 in the league in stopping opponents from converting on third down (32.5 percent). Miami guard Solomon Kindley, carted off with a knee injury in Sunday’s win, did not suffer any structural damage and could play Saturday.

The Raiders’ playoff hopes took a big hit after blowing last week’s game to the Chargers in overtime. Las Vegas couldn’t punch it in the end zone on the first possession of overtime and had to settle for a field goal. Then, L.A. came straight down the field and scored a touchdown to seal it. The Raiders were without four defensive starters due to injury as well as offensive coordinator Greg Olson, who tested positive for COVID-19. Mariota played well in relief of Carr, throwing for 226 yards with a TD and pick and rushing for 88 yards and a score. Mariota’s ability to run gives Las Vegas a different dimension on offense, which the Raiders could use to survive Miami’s defense. The Raiders are 11th in the NFL with 26.9 points per game. Three defensive starters – safety Johnathan Abram, linebacker Nicholas Morrow and cornerback Damon Arnette – were limited in practice this week, while defensive end Clelin Ferrell (shoulder) remained out. Safety Erik Harris joined defensive back Daryl Worley, cornerback Isaiah Johnson and wide receiver Henry Ruggs III on the COVID-19 list while linebacker Tanner Muse was shifted to injured reserve. The Raiders finish the season at Denver next week.

Miami has a lot more to play for here. Yes, the Raiders are technically still alive, but that will all end Saturday night. Miami is the best cover team in the league (10-3-1 ATS) and proved last week that they can run the ball while taking pressure off Tua. The defense should also be able to shut down the Raiders offense as well. It’s not one of my top picks, but I do like Miami to win and cover here.