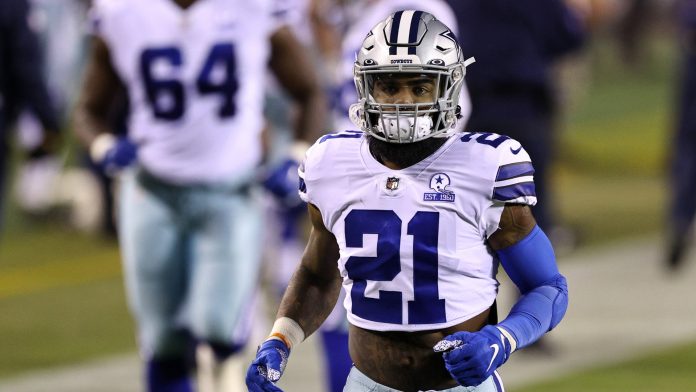 It’s been almost two weeks since the Dallas Cowboys lost to the Washington Football team on Thanksgiving and the team will finally take the field again on Tuesday. Dallas’ regularly scheduled game at the Baltimore Ravens was to take place last Thursday, but Covid pushed Baltimore’s game with Pittsburgh back too far in Week 12. The two teams are now ready to battle in Baltimore to conclude the Week 13 NFL schedule with playoff implications on the line. The Ravens need this win badly to stay within one game of the Indianapolis Colts for the final AFC wild card spot, while the Cowboys are still in the NFC picture. Despite having the worst record of all 16 NFC teams, Dallas can get within one game of the first place New York Giants and Washington in the horrible NFC East with a win in Baltimore. And all you have to do is win your division to claim a postseason spot, no matter how bad it is. The Cowboys have dropped five of six games since quarterback Dak Prescott was lost with a season-ending ankle injury including a 41-16 setback to Washington on Thanksgiving. Protecting replacement Andy Dalton against this Ravens defense will be tough with tackles Zack Martin (calf) and Cam Erving (knee) sidelined. Martin, a six-time Pro Bowl selection at right guard, was injured against Washington in his second game since being moved to right tackle. The Ravens are expected to have reigning league MVP Lamar Jackson behind center along with a slew of other players who were out with Covid. Backup quarterback Robert Griffin III was placed on injured reserve due to the hamstring injury he sustained during Wednesday’s 19-14 road loss to the Steelers. Jackson was one of 10 players on the team’s COVID-19 list after four players were removed from the list on Friday and three more on Saturday.

The Ravens lead the all-time series 4-1 but lost the most recent meeting 27-17 in Dallas four years ago. Back then, Prescott was in the middle of his rookie season, while Jackson was off winning the Heisman Trophy at Louisville. The Cowboys have covered each of the last two meetings, but are just 2-9 ATS on the season. Baltimore hasn’t been much better recently, covering just two of their past six contests. After a streak of four straight unders, the Cowboys last two games have gone over the total. Baltimore enters this contest as an 8-point favorite with a total of 45.5.

Dallas was one of the favorites to win the NFC this year, but are now tied for the most losses in the conference with the worst point differential (minus-108). Injuries have derailed their season and were embarrasses on Thanksgiving Day at home. About the only bright spot in that game was Amari Cooper, who caught six passes for 112 yards and a touchdown. The team was dealing with the sudden death early last week of strength and conditioning coordinator Markus Paul. The Cowboys have not had the same starting offensive line configuration for more than two games this season and the loss of both Martin and Erving will hurt. Running back Ezekiel Elliott could have a nice day against the Ravens, as Baltimore’s defense has allowed at least 112 rushing yards in three of their last four games. Rookie wideout CeeDee Lamb has 53 catches for 650 yards and four touchdowns in his first season. Dallas will be at Cincinnati on Sunday afternoon.

With a depleted roster last Wednesday in Pittsburgh, the Ravens managed to play well despite being a 10.5-point underdog. The defense kept them in the game and the offense managed a backdoor cover in the 19-14 loss. Baltimore had to call up 10 guys from the practice squad, but most of the regulars are expected back on Tuesday. Third-string quarterback Trace McSorley, a 2019 sixth-round pick out of Penn State, competed 2-of-6 passes for 77 yards against the Steelers, including a 70-yard touchdown pass to Marquise Brown. Jackson has thrown for 1,948 yards with 15 touchdowns and six interceptions in 10 games this season. He’s also rushed for 575 yards and three scores. The Ravens, who are averaging 25.6 points per game, will have running backs JK Dobbins and Mark Ingram back in the lineup. Baltimore will be at Cleveland on Monday night.

This is one of my least favorite games of the Week 13 slate, but I’ll take the points in this one. Even when the Ravens were at 100 percent health, they weren’t playing well. Jackson hasn’t been close to what he was last year and makes too many mistakes for my liking. Dallas will show a little pride here and keep it close.