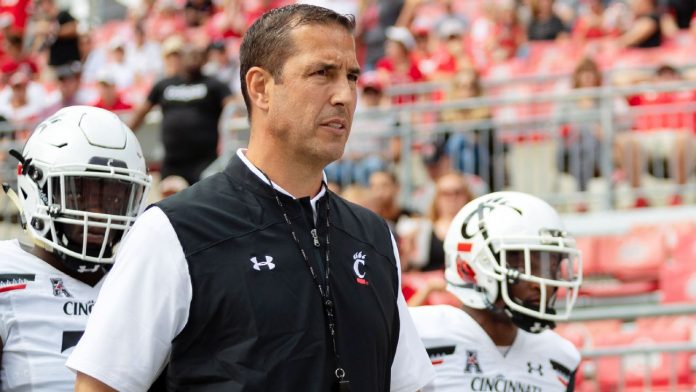 After a long wait, we have finally reached the College Football Playoffs. The first game up showcases an old hat against an upstart Cinderella. Nick Saban’s Alabama Crimson Tide are in the semifinals for the seventh time in its eight year history and will take on the only undefeated team in the country – the Cincinnati Bearcats. Alabama has won the national title three times, including last season’s 52-24 win over Ohio State. The rest of this year’s field has a combined four appearances. Alabama is the No. 1 seed for a fifth time including last year. They have won the title as a No. 4 (2017 season) and No. 2 (2015 season). The Crimson Tide are 5-1 in national semifinals, with the loss coming in the inaugural CFP in 2014-15 – 42-35 loss against Ohio State. The Tide rolled previously unbeaten Georgia 41-24 in the SEC Championship Game to earn the top seed.

Meanwhile, Cincinnati is the first Group of 5 school to reach the playoffs. In a couple of years, the Bearcats will become a Power 5 school when they join the Big 12. Cincinnati is no fluke. They are one of the best all-around teams in the country and are led by a defense that was second in the nation in pass defense (168.3 yards allowed per game) and had 18 interceptions (third) and 37 sacks (tied for 19th). A No. 4 seed, like the Bearcats, has won the title twice. The perfect season earned head coach Luke Fickell the Eddie Robinson National Coach of the Year Award. The winner will play in Indianapolis on Jan. 10 against either Georgia or Michigan. Alabama leads the all-time series 5-0 and won those games by a combined score of 156-27.

The Bearcats finished undefeated a season ago as well, but the CFP committee never gave them a shot to play in the national semifinals. They ended up losing 24-21 to Georiga in the Peach Bowl before running the table again this year. The key win this season was a road victory at then-No. 9 Notre Dame 24-13 in early October. It would have been a travesty if they let the one-loss Irish in the playoff ahead of Cincinnati. Quarterback Desmond Ridder leads a strong offensive attack. His 12,280 career total yards are an AAC and Cincinnati record, and his 116 total TDs are a school record. Cincinnati’s running back Jerome Ford (1,242 yards and 19 touchdowns), transferred from Alabama after the 2019 season. Cornerbacks Coby Bryant and Ahmad Gardner are the best duo in the country. Bryant won the Jim Thorpe Award, given to the nation’s top defensive back, while Gardner became Cincinnati’s third ever consensus All-American. The defense allows just 16.8 points per contest.

The Tide started the season No. 1 but were tripped-up 41-38 at Texas A&M on Oct. 9. Alabama reclaimed the top spot after their win over Georgia in the SEC title game. Quarterback Bryce Young clinched the Heisman Trophy that day by throwing for 421 yards and three touchdowns against the nation’s No. 1 defense. Young is the first Alabama QB to ever win the Heisman. Unfortunately, the Tide lost receiver John Metchie III to a knee injury against Georgia and will not play. Metchie had 96 catches for 1,142 yards and eight scores this season. The Crimson Tide are averaging a robust 42.1 points per contest, while the defense is allowing only 20.8. All-American linebacker Will Anderson Jr. leads the nation with 15 1/2 sacks.

Cincinnati is going to keep this close. They are too talented and are well-coached. The defense will be able to put pressure on Young and force him to make mistakes. The Bearcats offense is also a capable unit behind Ridder. I’m not going to say Cincinnati wins the game, but I will take the points.